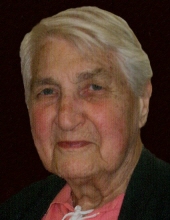 June Swanson, 95 of Bristol died on Monday, October 02, 2017 at Sun Dial Manor in Bristol. Her funeral will be 10:30 A.M. Tuesday October 10, 2017 at Bethesda Lutheran Church in Bristol. Rev. Chris Strohm will officiate. Burial will be in the Bristol Cemetery. Visitation will be 5-7 P.M. Monday at the funeral home. Adelpha June McKittrick was born on June 9, 1922 to John and Vena Louise (Hannon) McKittrick on the family farm in Union Township, Day County, north of Bristol, South Dakota. She was a lifelong member of Bethesda Lutheran Church in Bristol. She attended rural elementary school at Union Prairie, Dist. #181, near her home. She graduated from Bristol High School in 1939. She furthered her education obtaining a one year degree from Commercial Business School in Omaha, Nebraska. She used this education for the next couple years while she was employed at the ASC Office at Webster, South Dakota. She spent one summer, during the war years, working as secretary for the American Hawaiian Steamship Company in the Smith Tower at Seattle, Washington. Her duties entailed, filling out requisitions for the incoming camouflaged ships on Puget Sound. June returned to South Dakota and enrolled at Northern State Teachers College in Aberdeen, South Dakota. She graduated with a Bachelor’s Degree in Elementary Education. She taught many years in the rural, one room schools of Day, Co., as well as Bristol, Roslyn, Eden and Chamberlain, South Dakota. In July 1, 1946, she was united in marriage to Harry Swanson at Clark, South Dakota. The couple made their home on a farm north of Bristol. She treasured the many years spent there. Harry passed away in 1991. In 2000, she moved to Bristol, where she continued to reside until moving to Sun Dial Manor in Bristol in 2012. June enjoyed visiting with friends and relatives. She loved nature, watching birds and animals of all kinds. She was an avid reader and liked to play the piano and accordion. She enjoyed poetry, writing letters, scrapbooking, cooking, baking, and taking part in several programs in the area over the years. She will be remembered by her nieces and nephews as always being welcomed in her home. June passed away at Bristol, South Dakota on October 2, 2017 at the age of 95 years 3 months, and 23 days. She is survived by one nephew, James T. Swanson of Bristol, SD; four nieces, Signe L. (Dennis) Tol of Chugiak, AK, Kristin H. (Byron) Gross, Margie M. (Vern) Meyer, and Tracy A. Swanson all of Aberdeen, SD. She was preceded in death by her parents, husband, two brothers, Lloyd and Wesley, one sister, Leone McKittrick Swanson, one nephew, John D. Swanson, and two nieces, Audrey McKittrick Marske and Bonnie McKittrick Batnik.
To send flowers to the family in memory of A. June Swanson, please visit our flower store.