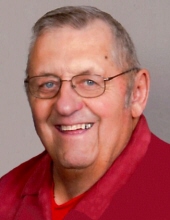 Adrian “Adie” Metz, 79, of Webster, SD passed away on Monday, July 12, 2021, at Bethesda Home in Webster. Funeral services will be 10:00 A.M. Friday July 16, 2021 at St. John’s Lutheran Church in Webster. Burial will be at the Roslyn Cemetery near Roslyn. Visitation will be Thursday 5-7 P.M. at the funeral home. In lieu of flowers, the family prefers memorials designated to St. John’s Building and Creating for the Future Fund PO Box 36 Webster, SD 57274. Adrian Duane Metz was born on May 22, 1942, at Peabody Hospital in Webster, SD to Amos and Grace (Hemmah) Metz. He was baptized and confirmed at Roslyn Lutheran Church. Adie attended school in Roslyn and graduated from RHS in 1960. After graduation he farmed and worked as a lineman and foreman for LREA in Webster. On May 11, 1963, he was united in marriage to MaryLou Dockter at Roslyn Lutheran Church in Roslyn. To this union four daughters were born: Charlene, Corinne, Ronette, and Stacey. The family made their home in Webster. Adie retired from LREA in 2005 but continued to work part time until 2010. He also continued farming until present time. Adie loved collecting John Deere tractors, ice fishing with grandkids, auction sales, hunting, and attending grandkids activities. He loved his family dearly and cherished time spent with all of them. He will be missed by his wife, MaryLou Metz of Webster, SD; four daughters, Charlene & Rolfe Ludtke and her children, Marcus Schmieg & Ashley (children Sheldon and Khloe), Jessica Schmieg (children Shaela and Tristin), and Cody Engler, Corinne Rumpca and her children Ryan Rumpca and Christi & Tanner Christensen (children Brynlee and Brody), Ronette & Ryan Costain and their children Aiden and Bronson, and Stacey & Jason Knebel and their children Madisyn, Gannon, Taelyn, and Grayson. He is also survived by two sisters, Phyllis & Keith Nelson and Joyce & Bob Coyne. He is preceded in death by his parents, brother Ronald Metz, niece Rhonda Coyne, and God-son Todd Storley.
To send flowers to the family in memory of Adrian "Adie" Metz, please visit our flower store.