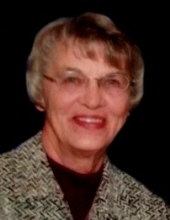 SUMMIT – Alice Rudebusch 85 of rural Summit passed away Wednesday October 16, 2019 at Coteau Des Prairies Hospital in Sisseton. Funeral services will be 1:00 P.M. Tuesday October 22, 2019 at Fiksdal Funeral Service in Webster. Burial will be in the Ortley Cemetery. Visitation will begin at the funeral home at 10:00 A.M. Tuesday and continue until the service. Memorials may be made in Alice’s name to LifeScape Foundation 2011 W. 2nd Street Suite #201 Sioux Falls, SD 57105 Alice Lorraine Olsen was born on Wednesday November 29, 1933 to Harvey and Emilia (Neuharth) Olsen in Day County, near Waubay, South Dakota. She grew up in the Waubay and Summit area. She attended school in Summit and graduated in 1951. On June 3, 1951 she was united in marriage to Neil Rudebusch at Waubay. The couple farmed in the Ortley area and together raised five children. In 1957, the family moved to a farm on “Rudebusch Corner” northwest of Summit. After the kids were grown, Alice became employed at Dakotah, Inc. in Webster from 1990-1995 at which time she retired. Neil passed away in September of 2005. Alice continued to live on the farm until present time. Alice was a kind woman with a strong faith. She enjoyed many things to keep busy such as crafting, embroidering, woodworking, traveling the entire United States, and above all else, she cherished time spent with her loving family. Alice passed away Wednesday October 16, 2019 at Sisseton, South Dakota at the age of 85 years, 10 months, and 19 days. She will be forever loved and greatly missed by her children; Danny (Julie) Rudebusch of Waubay, SD, Michael (Susan) Rudebusch of Roseau, MN, Debra Rudebusch of Watertown, SD, Terry (Calvin) Knapp of Paynesville, MN, and Kimberly (Patrick) Russell of Cold Spring, MN, 13 grandchildren, 23 great grandchildren, and 6 great-great grandchildren. She also is survived by her siblings; Herbert Olsen of Oshkosh, NE, Pearl Severson of Battle Creek, MI, and Lilian Jacobson of Paynesville, MN. She was preceded in death by her parents and husband.
To send flowers to the family in memory of Alice Rudebusch, please visit our flower store.