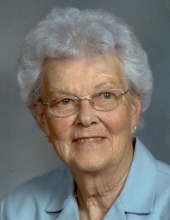 Amelia Ash 94 of Bristol and formerly of Pierpont died Monday August 5, 2013 at Sun Dial Manor in Bristol. Her funeral will be 3:00 P.M. Friday August 9, 2013 at Butler Lutheran Church in Butler, Rev. Janet Miller will officiate. Burial will be at Prairie Mound Cemetery near Butler. Visitation will be 5 – 7 P.M. Thursday at the funeral home. Theresa Amelia Brue was born on Sunday, May 4, 1919 on a farm in Valley Township, Day County, South Dakota to Knute and Sena (Svalland) Brue. She spent her childhood on the family farm south of Bristol. After graduating from high school she attended Northern State Teacher’s College in Aberdeen where she received a teaching certificate. She taught in rural schools for three years. On September 7, 1943 she was united in marriage to Cy Ash of Butler. After their marriage the couple farmed south of Butler. After their retirement from farming they moved to Pierpont. He passed away in 1994. In 2005 she moved to Aberdeen and in 2009 she entered Sun Dial Manor in Bristol. She was a member of Butler Lutheran Church where she was active in the women’s group and taught Sunday School. Amelia was a wonderful cook and baker, always adventuresome in trying new foods and recipes. She took great pleasure in gardening and raising beautiful flowers. She always enjoyed being with family and meeting with friends for coffee and visits. Amelia passed away on Monday August 5, 2013 at Bristol, South Dakota at the age of 94 years, 3 months and 1 day. Survivors include her children, Gayle (Richard) Davidson of Slayton, MN, Barbara (Dennis) Hahnemann of Aberdeen, SD and Daniel Ash of Butler, SD; seven grandchildren, John Davidson, Jim Davidson, Angela Landeen, Amy Peckham, Jennifer Faber, Randy Ash and Rob Ash; and fourteen great grandchildren. She was preceded in death by her parents, husband, one brother and three sisters. We remember Amelia’s warm smile and know that her light will shine upon many lives she touched. She was a women of great strength and a woman of great faith. She loved music, especially singing.
To send flowers to the family in memory of Amelia Ash, please visit our flower store.