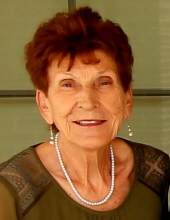 SPENCER, IOWA – Arlene (Lewandowski) Samson 79, of Spencer and formerly of Grenville passed away Wednesday October 2, 2019 at a care center in Spencer. *******Note Service Time Change********* Memorial services will be 2:00 P.M. Saturday October 12, 2019 at St. Joseph's Catholic Church in Grenville. Inurnment will be in the church cemetery. A lunch and time of fellowship will follow the service at The Grenville American Legion. Arlene was born on March 5, 1940 in Waubay, South Dakota to Joseph and Agnes (Block) Lewandowski. She was baptized and confirmed at St. Joseph’s Catholic Church in Grenville. She attended country school near the family farm close to Pickerel Lake. On November 19, 1960 she was united in marriage to Wallace Samson. They resided in Sioux Falls, South Dakota then Apple Valley, Minnesota. To this union, four daughters were born. In 1976, the family moved to Hartley, Iowa where they owned and operated the Iowan Motel for many years. Arlene later moved to Mesa, Arizona where she worked for McDonell Douglas making helicopters. Arlene was a member of the American Legion Women’s Auxiliary. In her free time, she enjoyed playing card games and playing the slots. In her younger years, she also enjoyed dancing and traveling. Above all else, she cherished time spent with her children and grandchildren. She was always the life of the party and will be greatly missed by all who knew her. Left to cherish her memory are her four daughters: Shelly (Demitri) Sahnas of Scottsdale, AZ; Roxanne (Tom) Morfitt of Hartley, IA; Jodi Strohman of Spencer, IA; and Jill (Rich) Charney of Gilbert, AZ; seven grandchildren: Joshua, Mallory, Sydney, Haley, Kinser, Conner, and Dayton; two great grandchildren Sophia and Amya; five brothers: Edwin (Dorothy) Lewandowski of Webster, SD; Donnie (Genevieve) Lewandowski of Grenville, SD; Kenny (Claudia) Lewandowski of New Ulm, MN; Dennis (Letha) Lewandowski of Webster, SD; and Gene (Lola) Lewandowski of Forman, ND; two sisters: Colette (Lyle) Carlson of Webster, SD and Marilyn Miotke of Grenville, SD. She was preceded in death by her parents and one brother Tony Lewandowski.
To send flowers to the family in memory of Arlene (Lewandowski) Samson, please visit our flower store.