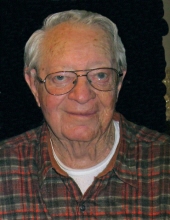 Arthur “Art” Wiedmann 89 of Roslyn and formerly of Watertown passed away Friday December 4, 2015 at Strand Kjorsvig Living Center in Roslyn. His funeral will be 1:00 P.M. Wednesday December 9, 2015 at Fiksdal Funeral Service in Webster. Burial will be in the Webster Cemetery. Visitation will be one hour prior to the service. Arthur J. Wiedmann was born March 8, 1926 to Ludwig and Katherine (Feiock) Wiedmann at the Wiedmann family farm near Akaska, South Dakota. He was baptized and confirmed into the Lutheran faith. Art attended country school near their home and high school through freshman year in Gettysburg, South Dakota. After his education he worked on the family farm until the age of 18 years, when he entered the United States Service. He completed basic training and was granted a furlough to return home for Christmas. The plane transporting Art and several other South Dakota soldiers crashed in Pennsylvania on Christmas morning in 1944. This tragic crash resulted in Art spending the next year hospitalized for a broken back along with other injuries that left him disabled and affected him his entire life. After the accident he worked various jobs as his health allowed. On August 31, 1958, he married Wanda Wiederhold at Bowdle, South Dakota. The couple made their home on a farm near Selby, South Dakota. Art was employed by a local farmer as a laborer. The family then moved to Lincoln, Nebraska where Art received an education in agronomy lab. In 1965 the family returned to South Dakota settling in Mobridge where Art worked as a delivery man for a dry cleaning service. In May of 1974 they moved to Conde, South Dakota and in 1978 they settled in Watertown, South Dakota where they resided until last May when Art’s health failed and he moved to Strand Kjorsvig Living Center in Roslyn, South Dakota. Art enjoyed reading, listening to music, fishing, watching baseball (especially the Minnesota Twins), and above all he enjoyed spending time with his family. Art was a very faithful man and was active in the various churches they attended over the years. He was also a member of DAV. He will be greatly missed by his wife of 57 years, Wanda of Watertown, SD, one son, Tim Wiedmann of Missouri City, TX; two daughters, Wanita (Bob) Bullert of Webster, SD and Ardis (Scott Hanlon) Kuhlman of Groton, SD, four grandchildren; Eli Kuhlman, Azariah Kuhlman, Ataiah Hanlon, and Ross Bullert, and one brother, Walter Wiedmann of Sturgis, SD. He was preceded in death by his parents and ten siblings; Olga Oberembt, Dollie Hanson-Schilling, Edith Templar-Abraham, Ella Branson, Emma Schram, Katherine Coleman, Adeline Elterton, Edward, Edwin, and Lawrence Wiedmann.
To send flowers to the family in memory of Arthur "Art" Wiedmann, please visit our flower store.