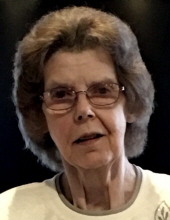 GLENDALE, AZ – Betty Barrie 82 of Arizona and formerly of Turton passed away Friday October 25, 2019 at Glendale Arizona. A memorial service will be 10:30 A.M. Saturday November 23, 2019 at Fiksdal Funeral Service in Webster. Inurnment will follow at the Webster Cemetery. Betty Jean Osterhoff was born on June 30, 1937 to Raymond and Alice (Herzog) Osterhoff. She attended school in Webster, SD though the 8th grade. After her education she worked at Whist Produce where she candled eggs. In 1957, she was united in marriage to Rolland Barrie She was a housewife and mother of four girls, Karol, Ann, Becky, and Jackie. Betty enjoyed baking, playing cards, and watching westerns. She also babysat various children of Turton and loved watching them play. She even had some occasional dogs and cats that would come by to visit. She said she didn’t give them treats though. Betty passed away at Hospice of The Valley in Glendale, AZ from complications from Parkinson’s the age of 82 years. She is survived by her four daughters, Karol (Randy) Norton of Peoria, AZ, Ann Barrie of Salinas, CA, Becky Heer of Turton, SD, and Jackie (Brad) Hanson of Sioux Falls, SD; sibilings, Rose, Dale, Donna, and Jewel; grandchildren, Ashley, Abbey, Sam, Nickolas, Nickole, Joslyn, and Taylor; and her four great grandchildren, Sawyer, Brinley, Paisley,, and Gavin. She is preceded in death by her parents, sister, Elaine, and her three brothers, Michael, James and Ricky.
To send flowers to the family in memory of Betty "Osterhoff" Barrie, please visit our flower store.