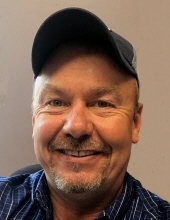 WEBSTER – Brad Reuer 53 of Webster passed away Sunday July 15, 2018 at his home in Webster. Memorial services will be 10:00 A.M. Saturday July 21, 2018 at Fiksdal Funeral Service in Webster, Pastor Mike McCarlson will officiate. Burial will be at Reliance Cemetery at a later date. Brad Allen Reuer was born on September 20, 1964 to Eugene and Laura (Anderson) Reuer at Chamberlain, South Dakota. He and his twin brother were baptized at Reliance Methodist Church in Reliance, South Dakota. He attended country school for a few years until moving to Herrick, South Dakota and later to Bonesteel, South Dakota. He graduated from Bonesteel High School in 1982. After high school, he attended a technical school for auto body. Brad had a passion for agriculture and became an agronomist. He worked in several locations west river until the drought moved him east river. He was always available and often checking in on his farming customers that he developed relationships with. On January 15, 2014, he married Jennifer Leyendecker at Jamaica. The couple made their home in Webster. Most recently, Brad took employment at Estelline Coop Grain. He loved his work and enjoyed taking care of his farmers. He also enjoyed traveling, riding his Harley Davidson motorcycle and playing with his dog, Sport! He will be forever loved and sadly missed by his wife, parents, children & grandchildren, stepchildren & step-grandchildren, siblings, in-laws, and nieces & nephews. He was preceded in death by his son Drew Reuer. Fiksdal Funeral Service of Webster is in charge of the funeral arrangements.
To send flowers to the family in memory of Brad A. Reuer, please visit our flower store.