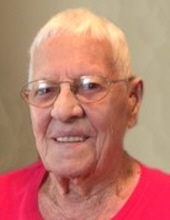 WIGGINS, MS- CeCelia “Toots” Gregerson 96 of Wiggins, MS and formerly of Webster died on Sunday, July 5, 2015 at a Wiggins, MS nursing home. Memorial services will be at 2:00 P.M. Saturday, July 11, 2015 at Fiksdal Funeral Chapel in Webster, Pastor Michael McCarlson will officiate. Inurment will be in the Webster Cemetery. Memorial visitation will be at the funeral home on Friday 5-7 P.M. fiksdalfuneral.com. CeCelia (Toots) Arthie Violet Donat was born on April 3, 1919, to Otto and Bertha (Carlson Donat in Roberts County, South Dakota. The family moved to a farm north of Webster where “Toots” attended country school. “Toots” married Raymond Gregerson November 19, 1938, at Our Savior Lutheran Church in Waubay, South Dakota. They lived on a farm in Morton Township until retirement and then moved into Webster to Downtown Manor Apartments. “Toots” continued to live there after Raymond passed away. In March of 2006, she moved to Wiggins, Mississippi to live with her only child, daughter Kay Skeide and husband, Richard Hurley. After a brief illness, she entered the Stone County Hospital May 12, 2015 and later became a resident at Azalea Gardens Nursing Center in Wiggins, Mississippi. “Toots” passed away Sunday, July 5, 2015 at the age of 96. “Toots” was a home maker and a farmer’s right hand. She loved working out in the farm fields and was a skilled operator of all farm equipment. She was an avid horseback rider. She raised a variety of farm animals and foul. “Toots” enjoyed having children come to see them. Her grandchildren spent many days and nights at the farm. She always had a deck of cards and lots of treats for the visiting children. During her retirement years in Webster, she enjoyed doing volunteer work at the Golden Age Center. “Toots” is survived by daughter Kay, son-in-law Richard Hurley of Wiggins, MS., grandchildren Shawn (James) Smith of Ovett, MS., David (Wanda) Skeide of Webster, and Douglas Skeide of Webster. Great-grandchildren Justin Rowland of Gonzales, Louisiana, Jeremy (Jessica) Rowland of Laurel, MS, Joshua (Kayla) Rowland of Ovett, MS, Casey Skeide of Minneapolis, MN, Christian Skeide of Webster, great-great-grandchildren Nataleigh and Tanner Rowland of Laurel, MS. Of interest is that “Toots” was present at the hospital in Hattiesburg, MS, when her first great-great-grandchild was born having all five generations present at that time. Also survived by step-grandchildren James Earl (Theresa) Smith II of Ovett, MS., April (Jarrod) Gray of Hattiesburg, MS., Matthew Kvernevig of Webster, Nick (Alaina) Kvernevig of Webster. Step-great-grandchildren Ashley (Chase) Barber, Amber and Andrew Allday, Anna Gray, and Kennedy Black all of MS. Briana and Nathan Kvernevig, Braly Wells, Chloe and Avery Kvernevig, all of Webster, and step-great-great-granddaughter Hannah Barber of Ovett, MS. “Toots” was preceded in death by Raymond, her husband of 53 years; Father and Mother; brother, Roy Donat; sister-in-law Nelvina Donat; sister Maxine Johnson; brother-in-law Raymond Johnson; son-in-law Orvis Skeide; great-granddaughter Vanessa Skeide.
To send flowers to the family in memory of CeCelia "Toots" Gregerson, please visit our flower store.