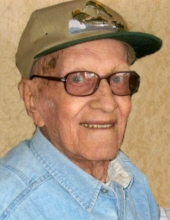 Clarence Sandvik, 89 of Bristol died on Sunday, January 5, 2014 at Sun Dial Manor in Bristol. His funeral will be at 11:00 A.M. Friday, January 10, 2014 at Fiksdal Funeral Chapel in Webster, Rev. Jan FitzGibbon will officiate. Burial will be at Bergen Lutheran Cemetery near Bristol. Visitation will be on Thursday 5-7 P.M. and prior to services on Friday at the funeral home. Clarence Sheldon Sandvik was born on Monday, December 1, 1924 to Lars and Lena (Grove) Sandvik at Peabody Hospital in Webster, South Dakota. His family lived in Union Township, Day County north of Bristol. He was baptized and confirmed at Bergen Lutheran Church. He attended country school in Lynn Township, District 152 and later graduated from Bristol High School in 1942. He was proud to be one of the first delegates to attend Boy’s State when it started in Aberdeen in 1941. At Boy’s State, he was elected Mayor of Los Angeles; he told that story many times. He was sponsored by the American Legion. Clarence was a farmer most of his life except a short time when he lived in the state of Washington. On June 27, 1947 he was united in marriage to Edith Thorness at St. John’s Lutheran Church in Webster. He worked for the Coast to Coast store in Webster. In 1948 the couple moved to his parent’s farm, which they later purchased. In October 1997 the couple retired from farming and moved to Bristol. He was a member of Bergen Lutheran Church where he served as an usher, trustee, deacon and also sang in the church choir. Clarence passed away on Sunday, January 5, 2014 at Bristol, South Dakota at the age of 89 years, 1 month and 4 days. Survivors include his wife, Edith of Bristol; four daughters, Pam Kirchmeier of Watertown, SD, Monica (Tom) Oberle of Ft. Payne, AL, Gwen (Don) Gross and Laurel Morris, both of Aberdeen, SD; ten grandchildren, thirteen great grandchildren and two great great grandchildren. He was preceded in death by his parents, two brothers, Lester and John, four sisters, Edith Barton, Nelvina Donat, Lila Taplin and Iva Anderson and a son-in-law, Dennis Kirchmeier.
To send flowers to the family in memory of Clarence Sandvik, please visit our flower store.