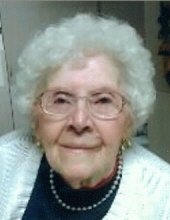 Cora Bloom, 88 of Webster died on Saturday, March 08, 2014 at Bethesda Home in Webster. (NOTE TIME CHANGE OF FUNERAL SERVICE) Her funeral will be at 10:00 A.M. Friday, March 14, 2014 at the United Methodist Church in Webster, Pastors Eugene and Marilyn Moeller will officiate. Burial will be at a later date at Webster Cemetery. Visitation will be at the funeral home on Thursday 5-7 P.M. ending with a 7 P.M. prayer service. Visitation will continue at the church on Friday prior to the funeral service. Cora O’linda Tetzloff was born on Sunday, January 31, 1926 to Eric and Maude (Fenno) Tetzloff at Edgely, North Dakota. She was the oldest of four daughters. She graduated from Hunter High School in North Dakota. She attended a six month college course at Moorehead, Minnesota and continued another twelve month course at Peabody Hospital for nursing at Webster. She worked as an Licensed Practical Nurse at Peabody Hospital in her early years. She was united in marriage to Earl Merritt Bloom, after a seven year fun filled courtship, on June 8, 1952 at Webster, South Dakota. The couple made their home south of Webster in Wheatland Township. She devoted many years at home with her husband, Earl and their six children. She returned to nursing and worked at Bethesda Home in Webster for twenty one years and Strand-Kjorsvig Community Rest home in Roslyn for four years. The majority of their married life was spent on the Bloom family farm where she enjoyed country living. The couple moved into Webster thirteen years ago. She was a member of the United Methodist Church in Webster where she directed the church choir for many years. She loved flowers, gardening, dancing, skating, music, card parties and family and friends. Cora passed away on Saturday, March 8, 2014 at Webster, South Dakota at the age of 88 years, 1 month and 8 days. Survivors include her husband, Earl of Webster; three sons, Monty (Mary) Bloom of Webster, SD, Marty (Geri) Bloom of River Falls, WI and Mark (Andrea) Bloom of Webster, SD; two daughters, Melanie (Harvey) Opitz of Eden, SD and Melissa Bloom of Watertown, SD; one sister, Patricia Spence of Milton Freewater, OR; sixteen grandchildren and twenty two great grandchildren. She was preceded in death by her parents, one son, Michael, two sisters, three grandchildren and two great grandchildren.
To send flowers to the family in memory of Cora Bloom, please visit our flower store.