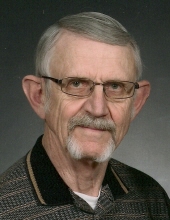 Dale Gerriets, 72 of Waubay died on Monday, December 05, 2016 at Sanford Hospital in Sioux Falls. Memorial services will be at 10:30 A.M. Saturday, December 10, 2016 at Our Savior’s Lutheran Church in Waubay. Rev. Charles Bunk will officiate. Memorial visitation will be at the funeral home on Friday 5-7 P.M. ending with a 7 P.M. Prayer Service. Dale Lewis Gerriets was born June 5, 1944 in Webster, South Dakota, to Lewis and Gladys (Hempel) Gerriets. He was baptized and confirmed at American Lutheran Church. He attended Webster School, graduating in 1962. He went on to Northern State College, earning a Bachelor of Science degree in secondary education in 1967. In 1963 he joined the South Dakota National Guard until receiving an honorable discharge in 1969. He received his Masters degree in education in 1974. Dale began his teaching career in Blue Earth, MN, where he met his wife Ann Suchy. Dale and Ann married in Sioux Falls, SD, December 27, 1967. After Blue Earth he taught in Rake, IA and Platte, SD, before moving to Waubay in 1970 where he taught industrial arts and math and was computer coordinator. He started the wrestling and cross country programs in Waubay as well as coaching football, track, and girls’ basketball. Taking a break from teaching, he owned the Waubay Insurance Agency from 1979-1985. He then returned to the classroom teaching in Gary, SD; Summit, SD; and ending his career at Waubay, retiring in 2004. He also started his own computer repair business. Following retirement, riding motorcycle became his favorite mode of transportation. He and Ann took several cycle trips visiting at least seventeen states as well as a couple Canadian provinces. Dale enjoyed hunting, fishing, bowling, dancing and playing pinochle. He made many friends calling square dances for many years throughout North and South Dakota, and Minnesota. He was also an amateur radio operator and liked to work on classic cars. Dale belonged to Our Savior’s Lutheran Church where he had served on church council and was its president for several years. He was on the Selective Service Board for Day County for many years. He was a member of the Waubay Senior Citizens, currently serving as president. Dale belonged to American Legion Post 17, American Legion Riders, Patriot Guard, and Vietnam Veterans of America Chapter 1054. He was also a member of Cruisin Classic car club of Webster. Dale was very proud of his students’ accomplishments and liked to think that he had made a small contribution to their successes. He liked challenges and would work to solve problems, especially those with technology. Survivors include his wife Ann; sons Michael of Bryant, SD, and Robert of Milbank, SD; siblings Ted (Dawn) Gerriets of Cochrane, AB, Richard (Bonnie) Gerriets of Sioux Falls, SD, William Gerriets of Webster, SD, Steve (Carla) Gerriets of Omaha, NE, and Lois (Don) Kirkegaard of Sturgis, SD; brother-in-law Allan (Betty) Suchy of Osage, IA. Dale was preceded in death by his parents and grandparents.
To send flowers to the family in memory of Dale Gerriets, please visit our flower store.