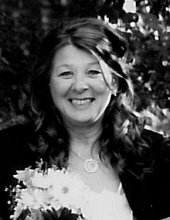 Donna Huggett-Schmidt, 64, of Pickerel Lake passed away Saturday May 15, 2021 at Sanford Hospital Webster. Mass of Christian Burial will be 10:30 A.M. Friday May 21, 2021 at St. Joseph’s Catholic Church in Grenville. Following Mass, everyone is invited to continue the celebration of Donna’s life at The Pickerel Lake Lodge. Visitation will be 5-7 P.M Thursday at the funeral home. In lieu of flowers, the family prefers memorial be directed to Lake Region Shriners C/O Rob Kading 18 E. 1st Ave Webster, SD 57274. Donna Jeanne Okroi was born on April 13, 1957 to Roman and Irene (Henning) Okroi at Sisseton, South Dakota. She was baptized and confirmed at St. Joseph’s Catholic Church in Grenville. She attended parochial school in Grenville and graduated from Roslyn High School in 1975 where she reigned as Roslyn Snow Queen senior year. After high school, she attended Stewarts Hairstyling School in Aberdeen and obtained a cosmetology degree. On July 17, 1976 she married Clark Huggett at St. Joseph’s Catholic Church, Grenville. The couple and their four children lived in Roslyn where Donna owned and operated Hair Headquarters out of their home. In 1989 Donna and Clark purchased the Pickerel Lake Lodge and in 2004 the couple built a home at Pickerel Lake. Clark passed away in 2009. Donna continued to own and operate the Lodge. On September 24, 2011 she married Keith Schmidt at Pickerel Lake. The couple continued to live at the lake and wintered in Florida after selling the Lodge in 2018.The Pickerel Lake Lodge was more than just a business to Donna; it was her passion and became part of her family. She often remarked how one of her greatest accomplishments was all the friends made at The Lodge whether it be guests or employees. There were many customers who walked into The Lodge as a stranger and left as lifelong friends to Donna and her family. If you were lucky enough to have worked for her you learned the value of hard work and treating people right. She took the phrase “work hard and play hard” to a new level. Donna had a great zest for life! She cherished time spent with her family and many friends. She was a proud Grandma who enjoyed reading, puzzles, boating, swimming, dancing, golfing, bargain hunting, and an Old Mill-Lite on a hot summer day! She was a past member of the Roslyn Jaycees, Pickerel Lake Ducks Unlimited, as well as an active member of St. Joseph’s Altar Society. Donna will be forever loved and greatly missed by her husband Keith Schmidt of Grenville, SD, sons; Spencer (Amber) Huggett and Sheldon (Jennifer) Huggett both of Roslyn, SD, daughter; Kelsey (Rob) Kading of Webster, SD, stepchildren; Tasha (Brent) Landwehr of Mankato, MN, Meagan (Brent) Veeder and Lee Schmidt both of Sioux Falls, SD, and 12 grandchildren. She also leaves behind siblings; Pete (Donna) Okroi of Grenville, SD, Deloris Lardy of Webster, SD, Deb (Terry) Morrill of Roslyn, SD, Diana (Mike) Jones of Belle Fourche, SD, father-in-law Tubby Schmidt of Roslyn, SD, and sister-in-law Pat Okroi of Sioux Falls, SD. She was welcomed to heaven by her parents, husband Clark Huggett, son Dustin Huggett, brother Julian Okroi, in-laws; Tubby and Darlene Huggett and Shirley Schmidt, brother-in-law Richard Lardy and niece Marci Janisch.
To send flowers to the family in memory of Donna Huggett-Schmidt, please visit our flower store.