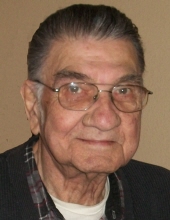 Duane Jensen, 85 of Webster died on Sunday, April 15, 2018 at V.A. Medical Center in Sioux Falls. His funeral will be at 2:00 P.M. Friday, April 20, 2018 at St. John’s Lutheran Church in Webster, Rev. Mike DeKraai will officiate. Military interment will be in Bristol Cemetery. Visitation will be one hour prior to services at the church on Friday. Duane Edward Jensen was born on January 18, 1933 to Edward and Mildred (Johnson) Jensen near Butler, SD. He attended country school through eighth grade, thereafter leaving to work on the family farm. He was later able to obtain his GED. He was united in marriage to his high school sweetheart, Marjorie Scott on May 21, 1952 in Bristol. The couple made their home in Bristol for a short time before Duane entered the U.S. Army in 1953, serving stateside in New Jersey during the Korean War. In 1955 he was honorably discharged and returned to South Dakota where he learned the meat cutting trade at The Roslyn Meat Market under the GI Bill. The family later moved to Boulder, CO in 1957 and eventually returned to Roslyn and Bristol for a short time until moving to Sisseton, SD in 1965 where they owned and managed Jensen’s Meat Locker. Upon selling the locker in 1975, Duane managed meat departments for several grocery stores which relocated the couple to Wahpeton, ND, then transferring to Morris, MN, Pierre, and later to Watertown, SD. In 1982 they settled in Webster where Duane managed the meat department at Mike’s Jack and Jill until his retirement in 1993. His hobby jobs after that included small engine repairs and maintenance. At age 45 he achieved his childhood dream of flying and received his private pilot’s license. He was an avid reader, enjoyed golf, cards, and all “Tail-Wagger” dogs. One of his great pleasures was spending time with his family, especially the grandchildren and many friends who could always expect a joke or story from him. He was a member of St. John’s Lutheran Church in Webster, the American Legion, Sisseton Masonic Lodge #131, Sisseton City Council, Volunteer Fire Department, and Black Hawk Drill Team. Duane passed away on Sunday, April 15, 2018 at Sioux Falls, South Dakota at the age of 85 years, 2 months and 28 days. After 63 years of marriage, Margie passed away in November 2015 and Duane continued to live in Webster until recently moving to Sisseton. He is survived by one daughter Deborah (David) Gilbertson; two sons, Dennis (Mary) Jensen of Sisseton, SD; and Scott Alan Jensen of Webster, SD; six grandchildren, Kristin (Clifton) Gilbertson-Curry, Erik Gilbertson (Lauren Fosheim), Rachael Gilbertson, John Gilbertson, Adam Jensen, and Scott Andrew Jensen (Kamra Christie); brother Bill (Cindy) Jensen, Micco, FL; half-siblings, Constance (Howard) Kleven, Elk River, MN; Kathy Andreason, Micco, FL; Victor (Joy) Jensen, Boulder, CO; and step-brother Bob (Joyce) Coyne, Webster, SD. He was preceded in death by his parents, wife and three half-brothers, Michael Coyne, Kenny and Eddie Jensen.
To send flowers to the family in memory of Duane Jensen, please visit our flower store.