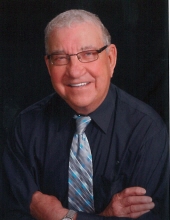 Edmund "George" Dolney, 87, of Bristol, passed away on Tuesday, August 31, 2021, at his home in Bristol while in the care of Avera at Home Hospice. A memorial service will be held 11:00 A.M. Saturday September 11, 2021 at Bethesda Lutheran Church in Bristol, Diane Hoines will officiate. Military inurnment will be at the Bristol Cemetery. Memorial visitation will be before the service Saturday 9-11 A.M. at the church. Edmund “George” Dolney was born on November 16, 1933, to Leo and Rose (Sichmeller) Dolney in Webster, South Dakota. He was baptized at St. Otto’s Catholic Church in Webster and later confirmed at First Lutheran Church in Hector, Minnesota. George attended Webster School. He spent a lot of time at Grandpa and Grandma Sichmeller’s farm growing up. After his education he worked painting houses before joining the United States Army 82nd Airborne Division on June 5, 1953 and was then honorably discharged on June 4, 1956. George was united in marriage to Bonita “Bonnie” Joy Huwe on July 27, 1957, in Bristol, SD. The couple had four children: Brenda, Denise, Geoffrey and Mark. The family lived in Willmar, Svea, and Hector, Minnesota. George worked for the local telephone company as a telephone company lineman and ended his career as Senior Engineer in Hector, MN from 1959 to his retirement in 1990. The couple moved to Bristol in 1990. George was a member of the Bethesda Lutheran Church in Bristol where he enjoyed singing in the choir and served on the church board for six years. He was also a lifetime member of the American Legion. George enjoyed woodworking, gardening, bowling, volunteering, refinishing furniture, traveling, fishing, and spending time with his family and especially the grandkids. George passed away on Tuesday, August 31, 2021, at his home in Bristol, SD at the age of 87 years, 9 months, and 15 days. George is survived by his loving wife Bonnie Dolney of Bristol, SD; two sons, Geoffrey (Nettie) Dolney of Hutchinson, MN and Mark Dolney of Hector, MN; two daughters, Brenda (Dru Fischgrabe) Bohlin of Hutchinson, MN and Denise Stewart (Paul Cicmil) of Fridley, MN; one brother-in-law Larry (Pat) Huwe of Auburn, WA; eight grandchildren, 3 great-grandchildren, and 1 great-great grandchild. He was preceded in death by his parents, one son Mark Edmund, and his 12 siblings: Ann, Adelpha, Catherine, Gladys, Helen, Della, Elizabeth, Ted, Joe, Eugene, Dennis and infant sister.
To send flowers to the family in memory of Edmund "George" Dolney, please visit our flower store.