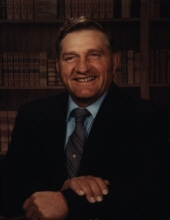 GRENVILLE – Edwin Paszek 85 of Roslyn and formerly of Grenville passed away Saturday October 26, 2019 at Strand Kjorsvig Living Center in Roslyn. Mass of Christian Burial will be 10:30 A.M. Saturday November 2, 219 at St. Josephs Catholic Church in Grenville. Military inurnment will be in the church cemetery. A rosary service will be held Friday at 7:00 P.M.at the church in Grenville. Edwin Anthony Paszek was born on April 19, 1934 to Albert and Veronica (Kulesa) Paszek in Day County, South Dakota. He attended District #177 in Kosciusko Township near Grenville. After his education, he continued to farm with his family. On September 28, 1954 he was united in marriage to Charlotte Sattler at Sacred Heart Catholic Church in Eden. In 1955, Edwin was drafted into the United States Army. He was station at Ft. Campbell, Kentucky and served in Japan for a short time. After his honorable discharge, the family moved back home and made their home on the Paszek family homestead northwest of Pickerel Lake. Edwin and Charlotte farmed grain, dairy, and beef. In 1980, the couple built a new home south of the original farm. Charlotte passed away in 1999. Edwin continued to live on the farm and spent winters down south. He stayed active helping his son with the farming operation as well as working as the Day County Weed Supervisor. Edwin was a lifelong member of St. Joseph’s Catholic Church in Grenville where he was part of the St. Joseph’s Catholic Church Society for many years. He was also very active in The Knights of Columbus. He served on the Board of Directors for the L.R.E.A for many years. He enjoyed fishing, traveling, spending time at his cabin at Pickerel Lake, and above all else he treasured time spent with his family. Edwin had a remarkable sense of humor and could crack a joke at any given moment. He will be greatly missed forever remembered for his fun loving nature. Edwin passed away Saturday October 26, 2019 at Roslyn, South Dakota at the age of 85 years, six months, and seven days. He will be forever loved by his children; LeeRon (Susan) Paszek of Grenville, SD, Dianne (Lynn Swanson) Paszek of Chamberlain, SD, and Denise (Stacey) Below of Webster, SD, one son-in-law John Mazurek of Sioux City, NE, nine grandchildren, and thirteen great grandchildren. He is also survived by one brother Jim (Betty) Paszek of Webster, SD, as well as many nieces and nephews. He was preceded in death by his parents, wife Charlotte, daughter Debbie Mazurek, one brother and four sisters.
To send flowers to the family in memory of Edwin Paszek, please visit our flower store.