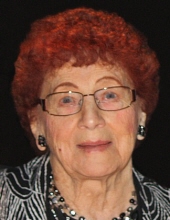 Elaine Solberg, 90 of Sioux Falls and formerly of Webster died on Monday, September 08, 2014 at Sanford Hospital in Sioux Falls. Her funeral will be at 10:30 A.M. Thursday, September 11, 2014 at Fiksdal Funeral Chapel in Webster, Marion Grimes will officiate. Burial will be at Hillside Cemetery at Lily. Visitation will be at the funeral home on Wednesday 6-8 P.M. and prior to services on Thursday. She was born to Esther and Emer Nelson on October 14, 1923. She lost her mother at the age of 7 and then helped raise her six brothers. She graduated from Lily High School in 1942. She was united in marriage to John Solberg on November 8, 1941 but later divorced. She worked hard most of her life outside of the home in addition to raising eight children. She also sold her baked buns, bread, lefse, and pickles. She spent the last 25 years with a special friend, Orren Bjerke. Elaine loved to watch her children, grandchildren and great grandchildren in their school and sporting activities. She was their biggest fan and loved to cheer them on. Family gatherings were very special to Elaine. She was especially happy when family came back to South Dakota for these gatherings. Throughout the years all her children, grandchildren and great grandchildren learned to love her famous potato dumplings. Everyone had a hand in the preparation of this Norwegian tradition and many laughs were shared. Elaine Vienna Solberg passed away at Sanford Hospital in Sioux Falls on Monday, September 8, 2014 surrounded by family at the age of 90 years, 10 months and 25 days. She is survived by her eight children; Darrell (Sandy), Sioux Falls, Norman (Leslee), Talkneetna, AK, Dennis (Kay), Watertown, David (Brenda), Watertown, Marcia, Sioux Falls, Marilyn Hanson(Lynn), Fargo, Marcella Whyte (George), Oakdale, MN, Dale, Dell Rapids; 16 grandchildren, Shannon (Molly), Heather (Kent), Holly (Tim), Matthew (Alanna), Mark (Heather), Billy (Michele), Gene (Doreen), Laura (Joel), Andrea (Jeff), Leah (Dave), Ashley (Kelsey), Jared (Brittany), Eric, Jordan, Tanner and Chloe; and 18 great-grandchildren, Fisher (Shannon), Onnika (Heather), Bennett and Vaughn (Holly), Brooke, Breanna, Wesley, Carter, Branden (Matthew), Mackenzie and Kurtis (Billy), Wrigley and Wilder (Gene), Mannix, Vander and Jenacy (Laura), Ryan and Aaron (Andrea). She is also survived by brother, Wendell Nelson, of CA, Sister-in-laws: Mona (Vernon) Nelson, Webster, Lillian (Duley) Nelson, of Idaho, Mae (Landis) Nelson, Webster, Delores (Jeff) Nelson, Webster. She was preceded in death by her parents, son Richard, Brothers: Duley, Jeff, Landis, Vernon and Boyd. Special friend, Orren Bjerke who passed away on Saturday, September 6, 2014 in Washington.
To send flowers to the family in memory of Elaine Solberg, please visit our flower store.