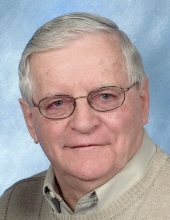 Eldon Eidahl, 82 of Watertown and formerly of Roslyn died on Friday, April 18, 2014 at his home in Watertown. His funeral will be at 10:30 A.M. Thursday, April 24, 2014 at Fron Lutheran Church near Roslyn, Janet Johnson will officiate. Burial with military honors will be in the church cemetery. Visitation will be at the funeral home on Wednesday 5-7 P.M. and prior to services at the church.

Eldon was born May 22, 1931 to John and Agnes (Gilbertson) Eidahl, Roslyn, SD. He was baptized, confirmed and married at Fron Lutheran Church rural Roslyn near the family farm. He attended rural school #202 in Independence Township and later received his GED after serving in the Army. Eldon entered the U.S. Army in November 1951 and served in Hanau, Germany during the Korean War. After fulfilling his service he was discharged in 1953 and returned to the family farm.

Eldon married Carolyn Strand at Fron in June 1959 and the two moved onto the family homestead where they lived for over 35 years. Eldon was very proud to be recognized as the operator of a 100 Year Century Farm at the South Dakota State Fair in 1989. He and family were the fourth Eidahl generation to live and operate the farm.

Eldon served for 40 years as the Roslyn American Legion Squad Commander; served on the Roslyn Creamery Board, the Roslyn School Board and was a member of Fron Lutheran Church. Eldon greatly enjoyed spending time with family and friends. Always having time to visit over a cup of coffee. He enjoyed traveling, especially enjoying a trip to Alaska and visiting the National Parks with his older grandchildren. He was proud of his Norwegian heritage and was able to fulfill his lifelong dream of visiting Norway in 2006. Eldon retired from farming and moved to Aberdeen in October 1994 where he and Carolyn lived until moving to Watertown in August 2011.