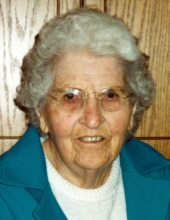 Eleanor Hinkelman formerly of Summit, passed away peacefully in her sleep on Wednesday, July 31, 2013 in Milbank, South Dakota at the age of 99 years, 6 months and 24 days. Funeral services will be at 10:00 A.M. Saturday, August 3, 2013 at Zion Evangelical Lutheran Church in Waubay, Rev. Iver Possehl officiating. Burial will be at Lakewood Cemetery. Visitation will be at the funeral home in Webster on Friday 5-7 P.M. and prior to services on Saturday. Eleanor Virginia Berringer was born at the family home in Waubay, South Dakota on January 7, 1914 to Mathias and Elizabeth (Hein) Berringer. She was baptized in the Catholic faith as a child. She attended school in Waubay and graduated from Waubay High School in 1933. After she received her education she worked as a nanny in the suburbs of Chicago for seven years before returning to Waubay. On November 27, 1941 she was united in marriage to Helmit Hinkelman at Waubay, South Dakota. After their marriage the couple made their home and farmed south of Waubay on the Holzerland homestead, before purchasing a farm southwest of Summit in Farmington Township, Grant County in 1945. They farmed for the next 37 years before retiring from farming in 1982. Helmit passed away in November 2000. After his death she moved into Milbank where she resided at Park Place for the next 12 years. Recent health issues were responsible for her entering St. William’s Care Center in Milbank. She was a member of Zion Evangelical Lutheran Church in Waubay. The hobbies she enjoyed, quilting and gardening were acquired while a member of Ten Busy Fingers Extension Club. She especially loved family gatherings. She was recently interviewed for an article in the Coteau Shopper and was quoted as saying, “My love for my family brings me much happiness in my mind and heart.” Her favorite quote was “life is fragile, handle with prayer.” Survivors include one daughter, Donna (Jerry) Zubke of Milbank, SD; two grandchildren, Deanna (Curt) Kunkel of Watertown, SD and Tim (Darla) Zubke of Milbank, SD; three great grandchildren, Christopher (Natasha) Zubke of Milbank, SD, Emily and Kaitlyn Kunkel of Watertown, SD; and many nieces and nephews. She was preceded in death by her parents, husband, an infant son and daughter, and one brother, William. .
To send flowers to the family in memory of Eleanor Hinkelman, please visit our flower store.