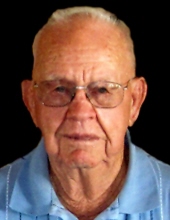 WEBSTER – Emil Ninke 92 of Webster passed away Sunday March 12, 2017 at his home in Webster. His funeral will be 2:00 P.M. Thursday March 16, 2017 at Fiksdal Funeral Service in Webster, Pastor Mike McCarlson will officiate. Military interment will be in the Webster Cemetery. Visitation will be Wednesday 5-7 P.M. closing with a 7P.M. prayer service at the funeral home. Emil George William Ninke was born on Sunday February 22, 1925 to Emil C. and Anna (Krause) Ninke at Webster, South Dakota. He was baptized at St. Paul Lutheran Church and confirmed at American Lutheran Church in Webster. He attended school in Webster, graduating in 1942. After graduation he worked for neighboring farmers and then, In January 1945, was drafted in the US Army during WWII being stationed in the south pacific. Emil received several medals and honors for his dedicated service. After his honorable discharge, Emil returned to Webster. On June 26, 1947, he married Dileen Wenck at Zion Lutheran Church in Andover, South Dakota. The couple made their home in Webster. Emil worked for Northwestern Public Service as a line foreman. He retired in 1987. After his retirement, he enjoyed hunting, fishing, trapping, gardening, playing pinochle and traveling. He was a member at Tabor Lutheran Church, American Legion Post #40, and VFW Post #4690. Emil served as post commander for both the American Legion and the VFW. He also was honor guard commander for more than twenty years. Emil passed away Sunday March 12, 2017 at Webster, South Dakota at the age of 92 years and 18 days. He will be greatly missed by his wife Dileen of Webster, SD, three daughters; Marsha (Dennis) Block of Sioux Falls, SD, Donna (Mike) Saavedra of Central, SC, and June Seehafer of Milbank, SD, one brother Ray Ninke of Huron, SD, five grandchildren; Emily (Michael) Zagar, Emilie (Jordan) Yancey, Alissa (Erik) Tofteland, Anna (Luke) Ammann, and Cody Seehafer. He is also survived by seven great-grandchildren and three more on the way. He was preceded in death by his parents, a son at birth, two brothers; Marvin and Herbert Ninke, and three sisters; Doris Ninke, Ruby Sandstrom, and Nila Gannon.
To send flowers to the family in memory of Emil Ninke, please visit our flower store.