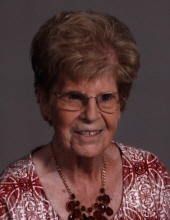 WEBSTER - Erma Lila Knutson, 91, of Webster, SD passed away Sunday, September 29, 2019 at a hospital in Sioux Falls. Funeral Services will be 1:00 P.M. Friday October 4, 2019 at St. Johns Lutheran Church in Webster. Burial will be in the Bristol Cemetery. Visitation will be one hour prior to the service at the church. Erma Lila Huwe was born on Thursday, July 19, 1928 at Bristol, South Dakota to Albert and Emma Huwe. She was baptized and confirmed at Bethesda Lutheran Church in Bristol, South Dakota. She attended Bristol High School. During her teenage years, Erma worked for Hays Café, Lena’s Café and her father’s business, Huwe’s Café in Bristol where she learned to have a strong work ethic. On September 13, 1949 she was united in marriage to Tommy Knutson at Bethesda Lutheran Church, Bristol. After their marriage, the couple lived in Bristol. In the early 60’s the couple moved to Webster, South Dakota where they owned and operated a Standard Station for 12 years. During this time, she also accompanied her husband to many political and legislative events as her husband, Tommy, was a South Dakota Legislator. In 1973, the couple and their family moved to Volga, South Dakota where she worked as a Manager for David K’s Clothing Store in Brookings, South Dakota. During this time, Erma was active in serving as a volunteer for Brookview Manor Nursing Home in Brookings which earned her an award by Ronald Regan for Volunteerism. In the early 80’s the couple and their family moved to Brookings where she worked for the South Dakota State University as a cashier. During this time, Erma was active in serving on Committees and Boards as an advocate for the mentally ill. In 1993, the couple retired and move to Enemy Swim Lake where they spent a number of years enjoying the lake, the outdoors, and hosting family events. Most recently, Erma made her home in Webster and spent her winters with her daughter and son-in-law in Maricopa, Arizona. Erma was an active member of St. John’s Lutheran Church and served as a Sunday School teacher and was a member of WELCA. Erma was a volunteer for Sun Dial Manor Nursing Home in Bristol, Bethesda Nursing Home in Webster, Strand Kjorsvig Nursing Home in Roslyn and Golden Living Center in Milbank. Erma had amazing musical talent and the nursing home residents remember her playing piano for them. Erma enjoyed finding and restoring antique furniture, collecting art and writing poetry. Erma went home to be with the Lord on Sunday, September 29, 2019, at the age of 91 years, 2 months and 10 days. She will be sadly missed by her three children, Joy Knutson of Webster, SD, Kris Knutson of Brookings, SD, and Kimberly (Randy) Saxberg of Maricopa, AZ; one cherished granddaughter, Sarah Kay (Tylor) Bement of Detroit Lakes, MN; one handsome great grandson, Kayden Bement; one daughter-in-law, Barb Knutson of Brookings, SD; two sisters, Nadine Sauer and Arletta Peterson both of Webster, SD; many family and friends. She was preceded in death by her parents, her husband of 60 years, Tommy Knutson; beloved son, Bruce Knutson; two brothers, Burton Huwe and Dale Huwe; three sisters, Lois Bradstreet, Irene Long, and Lucille Sheldon.
To send flowers to the family in memory of Erma L. Knutson, please visit our flower store.