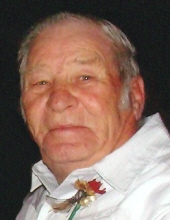 Ernest Gronke 82 of Waubay passed away Tuesday March 27, 2018 at Sanford Hospital in Aberdeen. Mass of Christian Burial will be at 10:30 A.M. Monday, April 2, 2018 at Immaculate Conception Catholic Church in Waubay. Military interment will be at Waubay Catholic Cemetery. Visitation will be at the funeral home on Sunday 5-7 P.M. ending with a 7 P.M. Rosary. Ernest Gronke was born on May 25, 1935 to Jacob Sr. and Leocadia (Dargatz) Gronke at Waubay, South Dakota. He was baptized and confirmed at St. Joseph’s Catholic Church in Grenville, South Dakota. He attended country school near the family farm near Pickerel Lake. After his education, he enlisted in the service and served from 1956 to 1958. After his honorable discharge he moved to St. Paul, Minnesota where he worked in a factory. On June 26, 1962 he married Delores Gaikowski at St. Joseph’s Catholic Church in Grenville. To this union three children were born, Ernest Jr., Randall, and Jodi. They made their home in Watertown, South Dakota, where Ernest worked for a farmer. In 1968, the couple purchased a farm near Waubay, South Dakota where he operated a dairy farm until 2000 when he began raising beef cattle. Besides his love for farming, he treasured his time with his wife, kids, grandkids, and great-grandkids. He also enjoyed reading western books, playing cards, and visiting with family and friends. Ernest passed away Tuesday March 27, 2018 at Aberdeen, South Dakota at the age of 82 years, 10 months, and two days. He will be dearly missed by his wife Delores of Waubay, SD, two sons, Ernest (Marilyn) Gronke Jr. of Waubay, SD, Randall Gronke of Waubay, SD, and one daughter Jodi (Dari) Schlotte of Webster, SD, eight grandchildren, and eight great-grandchildren. He is also survived by three brothers, Richard Gronke of Missoula, MT, Danny Gronke of DE, Barry (Val) Gronke of Watertown, SD, seven sisters, Gladys (Clayton) Brown of Butte, MT, Laura Olson of Aberdeen, SD, Alice Waligowksi of Waseca, MN, Diane Trego of Sheridan, WY, Katie (Len) Mack of Watertown, SD, Linda Gronke of Webster, SD, and Susie (Doug) Christensen of Ashton, SD as well as many nieces and nephews. He was preceded in death by his parents and one brother, Jack.
To send flowers to the family in memory of Ernest Gronke, please visit our flower store.