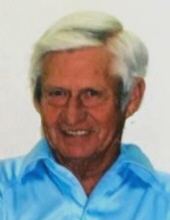 WEBSTER – Eugene “Gene” Watters 84 of Webster passed away Sunday December 22, 2019 at a care facility in Yankton. Mass Of Christian Burial will be 10:30 A.M. Friday January 3, 2020 at Christ The King Catholic Church in Webster. Memorial visitation will be one hour prior to the service. In lieu of flowers, the family prefers memorials to The Alzheimer’s Association 225 N. Michigan Ave., Fl. 17, Chicago, IL 60601. Fiksdal Funeral Service of Webster is in charge of the arrangements. fiksdalfuneral.com. Eugene Joseph Watters was born on October 14, 1935 to Donald and Abbie (Bistodeau) Watters at ¬ Webster, South Dakota. Gene attended grade school and high school in Webster. After his sophomore year he joined the South Dakota National Guard and later joined the Army and was stationed in Germany. After his honorable discharge in 1957, he returned to Webster. Gene was united in marriage to Karen Ann (Valsvig) on June 13, 1959 in Webster. Gene worked as a lineman in Webster before moving to Seattle, Washington with his wife and their three children, Mike, Jeanie, and Bill. Gene worked for Seattle City Light in Seattle and continued working there for the next 30 years. He retired in 1996. In 2001 Gene and Karen moved to DeSmet, South Dakota and in 2017 they moved back to Webster. Gene was a Sea Hawks fan and went to as many games as possible. He enjoyed bowling, camping, and golfing with his friends and family. He loved Arizona in the winter, Seattle in the summer and hunting and fishing season in South Dakota with his brothers. Gene passed away December 22, 2019 at Yankton, South Dakota at the age of 84 years, 6 months and 9 days. He is survived by his wife, Karen of Webster, SD, three children; Mike (Jimmie) Watters of Renton, WA, Jeanie Watters of Webster SD, and William “Bill” Watters of Stanwood, WA, four grandchildren; Matthew (Becca) Watters of Savannah, GA, David Watters of Milton, WA, Joseph Watters of Snohomish, WA, and Kaylie Watters of Webster, SD. He also will be greatly missed by his two great-grandchildren; Camille and Heinrich “Hank” both of Webster, SD, one sister Joan Shalley of Milbank, SD, and many nieces and nephews. He was preceded in death by his parents, nine siblings, and several nieces and nephew.
To send flowers to the family in memory of Eugene "Gene" Watters, please visit our flower store.