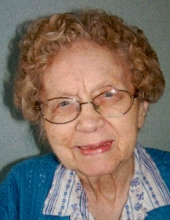 Eunice Fosheim, 90 of Webster died on Sunday, June 08, 2014 at Sanford Hospital in Webster. Her funeral will be at 10:30 A.M. Thursday, June 12, 2014 at St. John’s Lutheran Church in Webster, Rev. Daniel Ostercamp will officiate. Burial will be in the Webster Cemetery. Visitation will be at Fiksdal Funeral Service on Wednesday 5-7 P.M. with a 6:45 P.M. prayer service and the visitation will continue prior to services at the church on Thursday. Fiksdalfuneral.com. Eunice Lorraine Solsaa was born on Wednesday, September 26, 1923 to Edwin and Annie (Ihlen) Solsaa. The family lived at Jasper, Minnesota until she was two years old and they moved to a farm south of Webster. The family lived on different farms south of Webster until she was in the fifth grade. She attended Webster Public Schools and graduated from high school in 1942. She was confirmed at St. John’s Lutheran Church in Webster. She married Ernest Fosheim on October 11, 1947 at St. John’s Lutheran Church. After their marriage, the couple farmed north of Webster until Ernest became ill and had to retire. After Ernest passed away in October 1998, Eunice continued to live on the farm until she entered Bethesda Home in February 2012. She was a member of St. John’s Lutheran Church where she taught Sunday School and Bible School and was a member of W.E.L.C.A. and Circle. She also was a 4-H leader. Eunice’s life revolved around her husband, children and grandchildren. She enjoyed crossword puzzles, reading, knitting and crocheting. She would always have a song or joke to share, especially Ole and Lena Jokes. Music was very important in her home and she encouraged her children and grandchildren to participate in as many activities as possible. Eunice passed away on Sunday, June 8, 2014 at Webster, South Dakota at the age of 90 years, 8 months and 13 days. Survivors include three sons, Leon (Bonnie) Fosheim, Clyde Fosheim and David (Barb) Fosheim all of Webster, SD; three daughters, Sharon Fosheim of Webster, SD, Sheila (Scott) Mutschelknaus of Olathe, KS and Karen (Moussa) Camara of Cleveland, MS; two sisters-in-law, Violet Solsaa of Webster, SD and Vange Solsaa of Aberdeen, SD; fifteen grandchildren, Stacey (Terry) Traylor, Ken (Shawna) Fosheim, Jessica (Dominique) Fontenille, Jenny (Steve) Aker, Nick (Amanda) Fosheim, Brent Fosheim, Lauren Fosheim, Jerrid Fosheim, Lora Mutschelknaus, Kara Fosheim, Candace Fosheim, Kellie Fosheim, Lacey Fosheim, Christine Fosheim and Alex Fosheim; and six great grandchildren. She was preceded in death by her parents, husband and two brothers.
To send flowers to the family in memory of Eunice Fosheim, please visit our flower store.