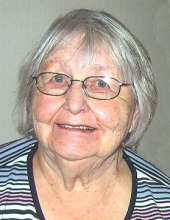 WEBSTER- Genevieve Gaikowski, 86 of Webster died on Monday, July 09, 2018 at Bethesda Home in Webster. Mass of Christian Burial will be 10:00 A.M. Saturday July 14, 2018 at Christ the King Catholic Church in Webster. Burial will be in the Waubay Catholic Cemetery. A prayer service and rosary will be 5:15 P.M. Friday at the church with a time of fellowship to follow at the parish hall. Genevieve Helen Reese was born May 26, 1932 to Florian and Margaret (Lesniak) Reese of Waubay, SD. She grew up on a farm located on the southeast side of Minnewasta Lake in Day County. Genny graduated from Waubay High School in 1950. She began a career working with an insurance company in Minneapolis, MN and later with Midland Insurance Company in Watertown, SD. On June 11, 1955, she was united in marriage to Donald Gaikowski at Immaculate Conception Catholic Church in Waubay, SD. The couple moved to Deadwood, SD where Don worked at Homestake Gold Mine in Lead, SD. In 1960, the family moved to a farm five miles north of Webster, SD and relocated to the Gaikowski family farm six miles north of Webster, SD in 1968. The three oldest of 11 children were born in Deadwood, SD. The other eight children were born in Webster, SD. In addition to staying home to care for her children, Genny spent many hours baking, gardening, canning, and sewing clothes for the family. Sewing was a talent she taught herself. She enjoyed sewing specialty items such as doll clothes and square dance attire. In the early 1980’s, she took employment sewing at Dacotah in Webster, SD and worked there for many years. Don passed away on September 11, 2003. Genny remained on the farm until 2014. She then resided at Bethesda Nursing Home in Webster, SD until the time of her death. Genny was a member of Christ the King Catholic Church where she was active in Alter Society, Waubay American Legion Auxiliary, Day County Trailblazers Snowmobile Club, and a Square Dance Club. Other interests include: polka and old-time country music, cake decorating, flea markets, and craft shows. Genny also had an appreciation for quilts and hand-crafted items. She enjoyed having company over for coffee. There were always home-made sweets and breads ready in case anyone would drop by! Throughout her life she was a hard worker and resilient. Genny was a 28 year Breast Cancer survivor. She was a very kind, sweet woman with a gentle disposition and great sense of humor who adored spoiling and snuggling babies and grandchildren. As they grew older she loved playing tricks on them! Above all else, she loved her family and cherished time spent with each and every one. She will be greatly missed by all who had the privilege of knowing her. She will be forever loved by her children: Jack (Dixie) Gaikowski of Tucson, AZ, Randy Gaikowski of Webster, SD, Jayne (Bill) Gottsleben of Philip, SD, Leon (Diane) Gaikowski of Webster, SD, Susan Gaikowski of Webster, SD, Kevin (Terri) Gaikowski of Watertown, SD, Scott (Joleen) Gaikowski of Britton, SD, Julie (Tim) Spiering of Webster, SD, Amy (Becky Brunswick) Gaikowski of Sioux Falls, SD, and Jed Gaikowski of Florence, AZ; 24 grandchildren and 11 great-grandchildren. She was preceded in death by her parents, husband, a daughter Pamela Pfitzer, a son-in-law Merle Pfitzer, a great-granddaughter Reese Louise Fischer, two brothers Herman Reese and Roger Reese, and a sister Mary Ann Reese.
To send flowers to the family in memory of Genevieve "Genny" Gaikowski, please visit our flower store.