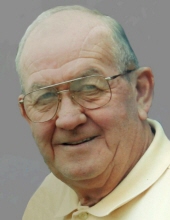 Gerald “Jerry” Jacobson, 77 of Webster died on Saturday, September 21, 2013 at Sun Dial Manor in Bristol. Services will be at 10:00 A.M., Wednesday, September 25, 2013 at St. John’s Lutheran Church in Webster, Rev. Daniel Ostercamp officiating. Burial with military rites will be in the Webster Cemetery. Visitation will be at the funeral home on Tuesday 5-7 P.M. and prior to services on Wednesday. Gerald Delvin Jacobson was born on May 20, 1936 to Milton and Gertrude (Conklin) Jacobson at Peabody Hospital in Webster, South Dakota. He was baptized at home and confirmed at the United Methodist Church in Webster. He attended elementary school in Webster and graduated from Webster High School in My 1955. On August 12, 1956 he was united in marriage to Barbara Johnson at the American Lutheran Church in Webster. The couple made their home in Webster. He was also a member of the South Dakota National Guard and was honorably discharged in June 1961. Jerry worked for American Food Stores in Webster, Aberdeen, Watertown and Madison, South Dakota. He then moved his family to Yuma, Arizona where he worked on the American pipeline in the Accounting Department and then was transferred to Albuquerque, New Mexico. They returned to Webster in April 1971. He bought the Phillips 66 stations and was a fuel oil Jobber until September 1990. Jerry and Barb also opened the Soft Ice Cream place known as JD’s, which, became a family favorite in town. Barb passed away in September 2011. He was a member of St. John’s Lutheran Church in Webster. He also was a member of Herbert McKennett Post 40 American Legion. Jerry enjoyed refinishing old furniture which he took pride and joy in. He enjoyed visiting with his friends uptown and talking about old times. Some of his greatest times were watching his grandchildren participate in their various activities such as basketball, baseball, volleyball, football and hockey. He was truly their biggest fan! Jerry passed away on Saturday, September 21, 2013 at Bristol, South Dakota at the age of 77 years, 4 months and 1 day. Survivors include two sons, Scott Jacobson of Watertown, SD and Tim (Robin) Jacobson of Webster, SD; three daughters, Susan (Mark) Rieb of Watertown, SD, Kari (Doug) Valsvig of Webster, SD and Ann (Scott) Hakes of Florida; three brothers, Carmen (Jan) Jacobson of Maple Grove, MN, Ron (Carol) Jacobson of Webster, SD and Randy Jacobson of Reno, NV; one sister, Kristi (Dennis) Morphew of Sioux Falls, SD; sixteen grandchildren and twelve great grandchildren. He was preceded in death by his parents, wife and one brother, Edmund “Eddie” Jacobson.
To send flowers to the family in memory of Gerald "Jerry" Jacobson, please visit our flower store.