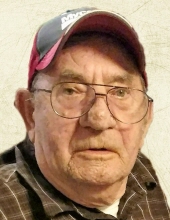 WAUBAY – Harvey Bartelt 86 of Waubay passed away Wednesday February 28, 2018 at Sun Dial Manor in Bristol. Funeral services will be 10:30 A.M. Saturday March 3, 2018 at Zion Evangelical Lutheran Church in Waubay.Rev. James Wilshusen will officiate. Military interment will be at Lakewood Cemetery near Waubay. Visitation will be Friday 5-7 P.M. closing with a prayer service at 7:00 P.M. at the funeral home. Harvey William Edward Bartelt was born on October 30, 1931 to Emil and Elsie (Zubke) Bartelt on the family farm north of Waubay in Waubay Township, Day County, South Dakota. He was baptized and confirmed at Zion Evangelical Lutheran Church in Waubay. He attended the Bartelt country school, District 118 near the family farm. After he received his education he farmed with his folks on the family farm until, in 1953 he was drafted into the U.S. Army. He served in Korea during the Korean War. After he was honorably discharged in 1955 he returned to the Waubay area. He rented the Zubke family farm in Waubay Township and farmed. Harvey was united in marriage to Alyce Luepke on April 6, 1956 at Echo, Minnesota. After their marriage the couple continued to farm in Waubay Township where they eventually purchased the Zubke family farm. Harvey loved farming and especially baling hay. He farmed until he entered Sun Dial Manor in Bristol in October 2016. He was a member of Zion Evangelical Lutheran Church in Waubay where he served on the Church Council as a Trustee and helped usher occasionally. He was a member of the Brady-Monson Post 129, American Legion in Waubay. He enjoyed playing cards and having coffee with family and friends. Survivors include his wife, Alyce of Waubay; three sons, Doug (Darla) Bartelt, Randy (Missy) Bartelt and Wayne (Janet) Bartelt all of Waubay, SD; one daughter, Cindy (Dennis) Feldmeyer of Waubay, SD; a sister, Arlene (Alex) Jordan of Watertown, SD; a sister-in-law, Verna Bartelt of Waubay, SD; thirteen grandchildren, four step-grandchildren, eight great grandchildren and 1 step-great grandchild and one on the way. He was preceded in death by his parents and two brothers, Earl and Duane.
To send flowers to the family in memory of Harvey Bartelt, please visit our flower store.

closing with a prayer service at 7P.M.