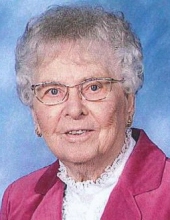 Irene Hallstrom, 95 of Minnetonka, MN and formerly of Webster died on Wednesday, July 9, 2014 at Presbyterian Home in Minnetonka. Her funeral will be at 10:30 A.M. Monday, July 14, 2014 at St. John’s Lutheran Church in Webster, Rev. Daniel Ostercamp will officiate. Burial will be in the Webster Cemetery. Visitation will be at the funeral home on Sunday 6-7:30 P.M. and prior to services on Monday. Irene Annadell Ihlen was born on Friday, August 9, 1918 to Otto and Gina (Gundvoldson) Ihlen on a farm in Egeland Township, Day County, South Dakota south of Webster. She was baptized in the Lutheran Faith and later confirmed at St. Pauli Lutheran Church near Wallace. She attended the Fiksdal country school and graduated from Webster High School in 1938. After high school she attended General Beadle College in Madison, South Dakota where she received her teaching certificate and also attended the Lutheran Bible Institute in Minneapolis. She taught school in the Highland and Ustrud country school districts. On May 23, 1943 she was united in marriage to Duane Hallstrom at St. Pauli Lutheran Church. After their marriage the couple made their home and farmed in Codington County, south of Webster and then moved to Webster in 1993. Duane passed away in May 2002. After his death she continued to live in Webster until 2009 when she moved to Beacon Hill Presbyterian Home in Minnetonka, Minnesota where she has resided since. She was a member of St. John’s Lutheran Church in Webster where she was active in W.E.L.C.A., Circle, bible study and prayer groups. She was a Gideon Auxiliary member for over forty years. Family and faith were very important to her and she especially enjoyed her children and grandchildren. Irene passed away on Wednesday, July 9, 2014 at Minnetonka, Minnesota at the age of 95 years and 11 months. Survivors include two sons, Paul (Vickie) Hallstrom of Winter Springs, FL and Lee Hallstrom of Delano, MN; one daughter, Sally (Brian) Johnson of Minnetonka, MN; a daughter-in-law, Nancy Hallstrom of Webster; nine grandchildren and fourteen great grandchildren. She was preceded in death by her parents, husband, one son, Ron, a great grandson, Rayce, four sisters and one brother.
To send flowers to the family in memory of Irene Hallstrom, please visit our flower store.