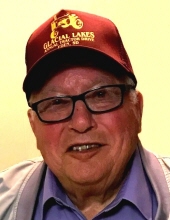 *** Please Notice Change in Service time and date due to impending weather.
Funeral services will be 2:00 P.M. Thursday, January 13, 2022 at Fron Lutheran Church near Roslyn and will be livestreamed on our Facebook page. Pastor Janet Johnson will officiate. Visitation will be 1 hour prior to service. Burial will follow at Fron Lutheran Cemetery.

James Hendrickson was born at home on the Hendrickson homestead on August 11, 1932 to Olaf and Ruby (Mahlen) Hendrickson. He attended country school in Liberty township and furthered his education at Roslyn High School. Following basic training and before heading off to Fort Gordon, Georgia, Jimmy married Farol Beasley on August 19, 1953 at American Lutheran Church, Webster, SD. The newly married couple spent two years living in Augusta, Georgia while Jimmy served in the U.S. Army during the Korean War. He was honorably discharged April 8, 1955. He took great pride in serving his country.

Following his discharge from the army, the couple returned to Day County where they lived on various farm sites before purchasing a farm east of Roslyn from Tom and Susie Huggett. The couple spent many happy years on this farm raising their growing family. In 1973, Jim and Farol purchased the Hendrickson homestead from Jim’s parents which was homesteaded in 1884 and was recognized by the state and county on numerous occasions over the years. They were both so honored!

In 2005 Jim and Farol moved to an acreage near Roslyn where they spent their final years together. Jimmy was Farol’s “willing/not so willing” assistant flipping many batches of lefse enjoyed by the family during the holidays. Frying doughnuts (Jane Holland’s recipe) was also shared by the two who did everything together! Serving Tom & Jerry’s - with Farol’s homemade batter - was another tradition they shared during the holidays. He enjoyed spending time with family and friends as well as time spent at the family lake cabin on Pickerel Lake.

Jim was active in the community serving on the Fron Lutheran Church Council and the Cemetery Board, the Roslyn School Board, a member of American Legion Rudolph Baukol Post #253, and was active with the Roslyn Community Development. He also served on the WEB Water Development Board of Directors for several years. Jimmy was active in the local Shriner’s Club. Both Jim and Farol assisted for many years at the Yelduz Shrine Circus volunteering to help with various tasks, assisted by a few of their grandchildren. He also served as an Aide to Potentate Bevan Schmidt.
Jim was a lifelong member of Fron Lutheran Church where he was baptized and confirmed. At the time of his death, he was the oldest member of the church congregation, an honor he enjoyed talking about with family and friends. Jimmy was an avid hunter and fisherman making several trips with friends to Canada fishing and also traveling to the West River for deer hunting.

Jimmy was very proud of his farming life. He enjoyed raising cattle, keeping an eye on his crops and observing the changing countryside from his four-wheeler or his pickup. After his retirement from farming he continued to help on the farm operating the combine until the age of 85. He was especially proud to pass on his knowledge of farming to his son, Jon, and then to his grandsons Jeremy and Travis Hendrickson.

Condolences may be sent to the family c/o Julie Pitzl 43649 122nd Street Eden, SD 57232
To send flowers to the family in memory of James "Jim" Hendrickson, please visit our flower store.