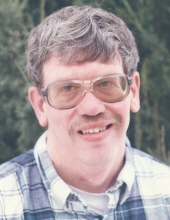 ROSLYN – Jeffrey Stavig 61 of Roslyn passed away Sunday September 9, 2018 at Strand Kjorsvig Living Center in Roslyn. Funeral services will be held 2:00 P.M. Friday September 14, 2018 at Roslyn Community Christian Church in Roslyn. Burial will be in the Roslyn Lutheran Cemetery. Visitation will be 5-7 P.M. Thursday at Fiksdal Funeral Service in Webster. Jeffrey Wayne Stavig was born on December 1, 1956 to Eldon and Kathleen (Rye) Stavig at Webster, South Dakota. He was baptized and confirmed at Roslyn Lutheran Church in Roslyn. He attended school in Roslyn until the age of 17 years when he moved to Aberdeen, South Dakota. He made his home at the Aberdeen Adjustment Training Center (ASPIRE) for 42 years. Jeff worked at various businesses while living in Aberdeen. Jeff was a member of Roslyn Lutheran Church and while in Aberdeen at Bethlehem Lutheran Church. He enjoyed road trips to Minneapolis and the Black Hills. He was active in Special Olympics Bowling and received many medals to which he took great pride in! Jeff also enjoyed watching WWE wrestling on television. He was an avid Minnesota Twins and Vikings fan, and made several trips to the Twin Cities for games. He had one other favorite sporting team and that was the Roslyn Vikings! Jeff was always sporting red and white when he was home for the weekend to cheer on the Roslyn Vikes! Jeff was a gentle soul with a kind heart. He made friends everywhere he went and always remembered everyone’s names. Jeff passed away Sunday September 9, 2018 at Roslyn, South Dakota at the age of 61 years, 9 months, and 8 days. He will be forever loved by his father Eldon Stavig of Roslyn, SD, sister Debra (Lynn) Zubke of Roslyn, SD, two nieces; Lindsey Frankenstein of Sioux Falls, SD and Emily Frankenstein of Roy Lake, SD, two uncles; Wendell (Charla) Rye of Claremont, SD and Marlyn (Cheryl) Rye of Pierpont, SD, one aunt Betty Stavig of Webster, SD, and many cousins and friends. He was preceded in death by his mother Kathleen, uncle Roger Stavig, uncle Loren Rye, uncle Elser (Mae) Rye, grandparents; Melvin and Edna Stavig and Ernest and Agnes Rye.
To send flowers to the family in memory of Jeffrey "Jeff" Stavig, please visit our flower store.