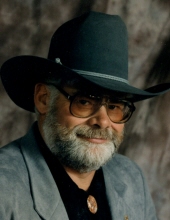 Jerry Storley, 70 of Roslyn died on Tuesday, October 07, 2014 at Sanford USD Medical Center in Sioux Falls. Memorial services will be at 2:00 P.M. Saturday, October 11, 2014 at Fiksdal Funeral Chapel in Webster, Michael McCarlson will officiate. Inurnment will be at Saron Lutheran Cemetery near Roslyn. Friends may sign the book and visit with family on Friday 5-7 P.M. Jerome Norman Storley was born on Friday, March 17, 1944 to Ingvald and Stella (Arneson) Storley at Webster, South Dakota. The family lived northeast of Roslyn in Nutley Township, Day County, South Dakota where he grew up. He was baptized and confirmed at Saron Lutheran Church northeast of Roslyn. He attended country school near his home and graduated from Webster High School in 1962. From 1962 – 1968 he served in the South Dakota National Guard. He worked road contruction until 1970 when he purchased a farm in Nutley Township. On November 25, 1970 he was united in marriage to Mary Coover. After their marriage the couple farmed. In 1986 he went into the construction business on his own and later worked for other contractors. Since 1998 he has spent the winter months in Arizona and summer months in the Roslyn area. He entered Strand-Kjorsvig Community Rest Home in May 2012. He was a Day County 4-H Leader, a Life Member of the American Legion and a Life Member of the N.R.A. He enjoyed hunting and spending time with his grandchildren. Jerry passed away on Tuesday, October 07, 2014 at Sioux Falls, South Dakota at the age of 70 years, 6 months and 20 days. Survivors include two sons, Burton (Krystal) Storley of Sioux Falls, SD and Lance (Jalyce) Storley of Spencer, IA; five sisters, June (Don) Backman of Wilmot, SD, Mary Ellen Lehr of Mina, SD, Connie (Dale) Parish of Ramsey, MN, Irene (Ray) Oland of Britton, SD and Glenda (Jerry) Yngsdal of Webster, SD; and five grandchildren, Riley, Olivia, Evan, Isaac and Aaron Storley. He was preceded in death by his parents.
To send flowers to the family in memory of Jerry Storley, please visit our flower store.