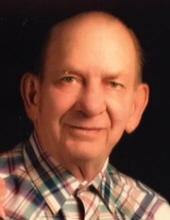 John Hojnacke, 79 of Santa Maria and formerly of Webster died on Saturday, June 13, 2015 at Santa Maria. Services 2:00 P.M. Wednesday, June 24, 2015 at Fiksdal Funeral Chapel in Webster with burial at St. Otto's Catholic Cemetery. Visitation will be at the funeral home on Tuesday 5-7 P.M. and prior to services on Wednesday. John Francis Hojnacke, III was born October 13, 1935, to John and Theresa (Lewno) in Webster, South Dakota. He was baptized at St. Otto’s Catholic Church in Webster. He grew up in HIghland Township on the family farm, later the family relocated to Webster. He graduated from Webster High School in 1955. He was a member of the National Guard for many years. On September 5, 1959 he was united in marriage to Marilyn Johnson at Webster, they shared 55 years together. They moved to California in 1963 and in 1974 he transferred to Santa Maria. He retired from Unocal in 1993, after 27 years with the company. John Loved to spend time out in the country, and for many years spent the summers on Marilyn’s family farm near Webster. He also loved to travel, play cards, fish, gamble, and he loved to share stories. Family was the most important thing in the world to him. John passed away on Saturday, June 13, 2015 at Santa Maria, California with his family by his side at the age of 79 years and 8 months. He is survived by his wife Marilyn, two daughters Lynnette Silva (Mannie), Brenda Burciaga (Louie) all of Santa Maria. Five Grandchildren John Silva, David Silva of Santa Barbara, California. Marrissa Andres, Dallas Burciaga, and Dominique Burciaga of Santa Maria. He was preceded in death by his parents and three brothers Daniel, Francis (Fritz), and David.
To send flowers to the family in memory of John Hojnacke, please visit our flower store.