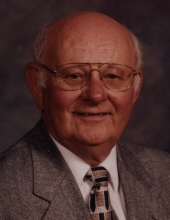 John J. Lee, 86 of Webster died on Monday, June 03, 2019 at Bethesda Home in Webster. Memorial Services will be held at 11:00 A.M. June 14, 2019 (Friday) at St. Johns Lutheran Church in Webster. Rev. Mike DaKraai will officiate. Military inurnment will be at Saron Lutheran Cemetery near Roslyn. Memorial visitation will be one hour prior to the service at the church. John Jule Lee was the only child of Clarence and Juliette (Flagstad) Lee. He was born on November 25, 1932. He spent all of his growing years in Webster surrounded by a large extended family. He graduated in 1950 from Webster High School and always spoke lovingly of his upbringing, his friends and how he loved that area of South Dakota. He always looked forward to the Webster reunions so he and his friends must have had a great time growing up. He entered the Navy and served for a time on the east coast at Patuxent River Naval Air Station, MD. Upon returning to South Dakota he enrolled at SDSU and earned a degree in Pharmacy in 1959. He loved the Jackrabbits and always gave everyone else from other SD schools a hard time! He married Arlene Moen of Roslyn in 1957. They resided in Brookings until graduation. While there their daughter, Rebecca, was born. In 1959 their son, Craig, was born in Watertown. John worked for a short time in Groton, SD. In 1960 the family moved to Forman, ND, where he opened Forman Drug which he ran until selling the business in 1986. While bringing up his family in Forman he was very involved in many community activities. He played men’s softball, served on the school board and city council, led the establishment of the Forman Manor, enjoyed the Lion’s Club, and was happy with the building of the golf course. His biggest joy was the sports/activities of Sargent Central High School and Babe Ruth/American Legion Baseball where he followed his kids and everyone else’s. Many a game-day synopsis was discussed at the drug store the next day. His love of Pickerel Lake and the little log cabin of his childhood remained a constant throughout his life which included a move to the south end and a different cabin. During the summer he spent most weekends at the lake except for a couple long weekends watching the Minnesota Twins where it would be bat day, helmet day, ball day, pennant day or something else for the kids. As his kids grew he spent countless hours entertaining their friends and teaching them to ski. The Fourth of July was spent loading up the fireworks that didn’t sell at the store and having a wonderful display on the east shore of Pickerel Lake with many neighbors. He was indeed a family man. He was widowed in 1982 upon the death of Arlene after 25 years of marriage. He was a lucky man again finding a second love in Shirley Stianson Fisher. They married in 1983 in Pierre, SD. He gained a stepson, Scott Fisher, with this marriage and eventually three grandchildren who joined his five grandchildren. In 1983 he sold the drugstore in Forman and he and Shirley built a home in Sun Lakes, AZ. They were snowbirds at first and continued to spend more time there. He worked as a pharmacist at Walgreens, CVS, and Revco drug. They enjoyed very much their years in Arizona but always knew they would return to Day County. John’s health began to decline and in May of 2018 they moved back to Webster. He entered Bethesda Home on April 5, 2019, and passed away on June 3, 2019, at the age of 86 years. John loved his family, liked and enjoyed almost all sports, travel, and visiting with relatives and friends. Survivors include his wife, Shirley, daughter, Rebecca (Donald) Larson of Austin, TX, son, Craig Lee, of Ponte Vedra Beach, FL, and stepson, Scott (Gayle) Fisher of San Diego, CA. His grandchildren are Sarah Larson, Katherine Larson, Laura (Connor) Bourgault all of Austin, TX and Collins Lee of Florida, Sarah (Tony) Fernandez, Taylor (May) Matthews, Jonathon (Elizabeth) Matthews, all from San Diego. His great grandchildren are Anneliese Fernandez, Allison Matthews, Jessica Matthews, Anabel Matthews and William Matthews, all from California. Other survivors include his sister-in-law, Marlys Delle, niece, Rachel (Keith) Delle-Miller and their children, James and Alison all of Scottsbluff, NE, and several cousins. Preceding him in death were his parents, his first wife, grandson Michael Larson and brother-in-law Winfield Delle.
To send flowers to the family in memory of John J. Lee, please visit our flower store.