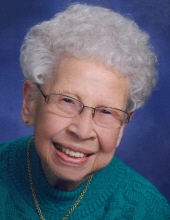 Joyce Huwe, 96 of Bristol died on Wednesday, July 12, 2017 at Sun Dial Manor in Bristol. Her funeral will be at 2:00 P.M. Sunday, July 16, 2017 at Bethesda Lutheran Church in Bristol, Rev. Chris Strohm officiating. Burial will be in Bristol Cemetery. Visitation will be two hours prior to service at the church. Joyce Cynthia Kjosa was born on September 11, 1920 to Gerhard and Isabelle (Johnson) Kjosa on the family farm east of Lily, South Dakota. She was baptized and confirmed at Lily Lutheran Church. She attended school in Lily. On October 12, 1935 she married Burton Huwe at the Kjosa family farm. She worked as a cook for many years. She was a member of Bethesda Lutheran Church and Ladies Aide. From 1951 to 1958 she was a cook at Bristol School, becoming involved with PTA and helped raise funds for new band uniforms. In 1958 they moved to Renton, Washington and then to Kent, Washington. They joined Kent Lutheran Church and Kent Senior Center and were active in musicals and shows at the Center. Joyce and Burton were invited to perform with their accordions, at the Rotary and Lions Clubs and many other places such as church, nursing homes and parties. They were called the Accordion Renegades. Joyce worked at Szabo Foods at Boeings Renton plant, Blue Cross in Seattle, Green River College in Auburn where she was a Master Baker and at GSA at Auburn. She retired in 1989 and the couple moved to Bristol, South Dakota rejoining Bethesda Lutheran Church and Bristol Senior Citizens. They entertained with their accordions and the Huwe Family Singers at church, Senior Center, nursing homes and parties. She was a lifetime member of VFW Auxiliary. Burton passed away in April 1996 and in 2000 she moved to Pleasant View Apartments in Webster. In January 2013 she entered Sun Dial Manor in Bristol and then the Johnson Center. She re-entered Sun Dial Manor on July 11, 2017. Joyce loved her family and enjoyed spending time with the grandchildren, reading, working on puzzles and listening to music. Joyce passed away on Wednesday, July 12, 2017 at Sun Dial Manor in Bristol, South Dakota at the age of 96 years, 10 months and 1 day. She leaves her children; one son, Larry (Patricia) Huwe of Auburn, WA and one daughter, Bonita (George) Dolney of Bristol, SD; six grandchildren, Donna Huwe of Auburn, WA, Corey (Margaret) Huwe of Wilkerson, WA, Brenda Bohlin (Dru Fischgrabe) of Hutchingson, MN, Denise Stewart (Paul Cicmil) of Fridley, MN, Geoff Dolney of Hutchinson, MN and Mark Dolney of Hector, MN; nine great grandchildren, Brandon & Tanner Huwe, Jaime Augeson, Jodie Michelson, Christian Stewart, Josie Dolney, Jessica Dolney, and Emma Dolney; two great great grandchildren, Riley Haas and Peyton Sing; and three sisters-in-law, Erma Knutson of Webster, SD Arletta Peterson of Groton, SD and Nadine (Vern) Sauer of Webster, SD. She was preceded in death by her parents, husband, six brothers, Gladwin (Glad), DeForrest (Jiggs), Rodney (Busty), Orlando (Shorty, Lotain (Tainey) and Truman and two sisters, Eleanor Huwe and Opal Gebur.
To send flowers to the family in memory of Joyce Huwe, please visit our flower store.