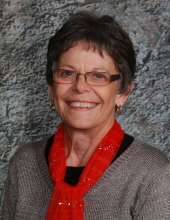 Mass Of Christian Burial will be 10:30 A.M. Friday, January 21, 2022 at Christ The King Catholic Church in Webster and will be livestreamed on our Facebook page. Burial will be at St. Otto's Cemetery, Webster.

Visitation will be at the church Thursday 5-7 P.M. with a 6:30 Rosary Service.

Judith Marie Hinze was born on February 2, 1945, to Gordon and Florence (Wattier) Hinze at Webster, South Dakota. She was baptized and confirmed at St. Otto’s Catholic Church in Webster. Judy attended country school near her family home in Wheatland Township south of Webster. The family later moved to Webster and Judy graduated from Webster High School in 1963.

After high school, Judy continued her education in Sioux Falls while working various jobs. She later moved to California and Colorado and ultimately returned to Webster. On October 26, 1968, she was united in marriage to Dennis Gaikowski in Webster. The couple made their home northeast of Webster where they engage in farming. Judy stayed home to raise their four children as well as helping Dennis with their farming operation. Once their kids were older, Judy took employment at the US Postal Service in Webster until her retirement. For many years Judy and Dennis owned and operated the Webster Theatre. Dennis passed away in 2004.

Judy was a member of Christ The King Catholic Church where she served on the altar society and taught CCD. She was also a member of the Catholic Daughters. She enjoyed camping, woodworking, DIY projects, time spent with her friends, and above all else, she cherished time spent with her grandchildren as they were her pride and joy. Being grandma was her number one priority and getting into mischief with the grandkids. She was known for her fun and carefree golf cart rides and loved animals of all kinds especially horses. Putting life ahead of all other cares and everyday was to be fun. She had a distinctive whistle, so everyone knew it was Grandma coming