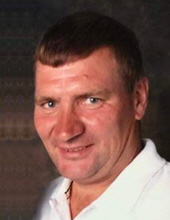 Funeral Services will be on Monday, December 27, 2021 at 10:30 A.M. at Tabor Lutheran Church in Webster, SD. Pastor Mike McCarlson and Pastor Scott Dempster will officiate. Luncheon will follow at the church.
Interment will be at 2:00 P.M. on Friday, May 27, 2022  at Lakewood Cemetery in Waubay, SD.

Kenyon was born January 13th, 1960 to Ivan and Margaret (Zubke) Jorgenson in the Day County Hospital. He was baptized, received his first communion, and was confirmed in the Zion Lutheran Church in Waubay. Kenyon grew up with his parents on his grandparents’ (Adolph and Laura Jorgenson) farm South of Waubay. He attended Waubay Public School and graduated May 28th, 1978. When in school, Kenyon was active in the band where he played trombone through high school. His hobbies included fishing, trapping, raising different varieties of pigeons and doves, and riding his motorcycle across Bitter Lake when it was dry with his brothers.

On September 14th, 1985, Kenyon married Kathy Drovdal at Hope Lutheran Church in Summit and they moved onto his grandparents’ (Paul and Shirley Zubke) farm south of Waubay. From a young age, Kenyon always loved farming so he started his own dairy farm. Kenyon and Kathy worked together on the farm where they raised their family of seven children. In the last ten years, he was also employed at Twin City Die Casting in Watertown. He was also active on the Wheatland Township board for many years.

Kenyon was a loving father and a friend to all. He was always making people smile and helping anyone at any time. Kenyon will be remembered for always giving his all in everything he did and for never giving up. He liked to joke around, enjoyed old country music, and watching westerns. He loved traveling and learning new things.

Kenyon loved the country life and could often be found in the garden planting vegetables or flowers, on his tractors, or on a boat fishing. He was an animal lover who enjoyed his cows, sheep, goats, horses, donkeys, doves, rabbits, chickens, ducks, turkeys, pig, cats, and dogs. He loved spending time with his family, being involved in their lives, and sharing their accomplishments was the highlight of his time here on earth, especially of his children and grandchildren. He was so proud of his family.

Luncheon will follow at the Tabor Lutheran Church in Webster, SD.