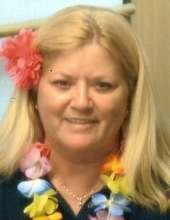 Lona Kuecker, of Webster, died after a courageous battle with breast cancer at the age of 59 years, 8 months and 10 days, on Wednesday, December 31, 2014, surrounded by her loving family at her home. Mass of Christian burial will be at 10:30 A.M. on Monday, January 5, 2015 at Christ The King Catholic Church in Webster. Burial will be at St. Otto’s Catholic Cemetery in Webster. Visitation will be at the funeral home from 2-4 P.M. on Sunday, then continuing at the church at 6 P.M. with a 7 P.M. Rosary. . Lona has requested that donations be sent to the Wounded Warrior Project in lieu of flowers. If you wish to make a donation in Memory of Lona, please click the following link to their online form: https://support.woundedwarriorproject.org/default.aspx?tsid=72&campaignSource=WEBSITE&company=&source=HONOR. If you would rather mail a check, please make it payable to Wounded Warrior Project and send to the following address: Wounded Warrior Project PO Box 758517 Topeka, KS 66675 Lona Jean Coin was born on Thursday, April 21, 1955, to Edward and Harriet (Hanson) Coin in Rapid City, South Dakota. Lona began her schooling in Rapid City and continued her education in Webster after the family relocated there in 1968. She started working at Wist Lockers in Webster at the age of fourteen to earn money to buy a record player and those good old 45’s and LP’s so she could listen to the great music of the 50’s and 60’s. She also worked at Popps Café and Dakotah, Inc. Factory Outlet Store. She was united in marriage to Ron Kuecker on November 15, 1975 in Webster. After their marriage, the couple made their home in the Webster area. In 1975, she joined the South Dakota National Guard and served with the Headquarters Battery in Webster. Since women could not be in a combat situation at that time, she transferred to Milbank where she served in Desert Storm. Lona then continued her service in the National Guard as a recruiter and later worked in administration. Her final seven years of military service took place at the Military Entrance Processing Station in Sioux Falls, where she worked as a Senior MEPS Guidance Counselor, aiding the troops who would be sworn in and sent off to basic training and AIT. Lona ran the total gamet in the military, from basic training and AIT, to serving in the Mid-East. Lona loved her country and, as Ron says, “had the courage of a true American soldier.” After retirement from the National Guard in 2010, Lona worked for Ron for a season, although the wages were poor. At the end of November 2011, she started working at Pleasant View Apartments as Director until this past summer when the cancer forced her to give up her job. She was a member of Christ The King Catholic Church, Herbert McKennett Post 40 American Legion, American Legion Auxiliary, V.F.W. Post 4690, a Desert Storm Veteran, a Lifetime member of the Enlisted Association and a member of the Cruisin Classics Car Club. Lona also enjoyed playtime with her five granddaughters, visiting friends in the local nursing homes, hunting, fishing, traveling, hunting for seashells, baking and cooking Sunday dinners (and other meals) for family and friends. Lona, like Ron, loved to spend time together listening to and singing the rock & roll songs of the 50’s and 60’s. They eventually ended up with their Blue Moon 50’s room, a gathering place for good times with many family and friends. We truly believe that Lona has one of the best seats in the house at the greatest concert of them all, listening to Jesus our Lord and Savior at that never ending gathering in heaven. Lona could have easily lost her life in the Rapid City flood in 1972, but God had another plan for her. He decided to give us the gift of her life to be shared among Ron, their two beautiful daughters, Rebecca and Kelli, son-in-law, Joey, and five granddaughters. Survivors include her husband Ron of Webster; two daughters, Rebecca Kuecker and Kelli (Joey) Bullert both of Webster, SD; two sisters, Sandra (Bruce) Brewer of Salt Lake City, UT and twin sister Mona (Wayne) Kuecker of Webster, SD; a sister-in-law, Vicki Coin of Webster, SD; and five granddaughters, Jadynn, Mattea, Marley, Nevaeh and Penelope. She was preceded in death by her parents and one brother, Ed.
To send flowers to the family in memory of Lona Kuecker, please visit our flower store.