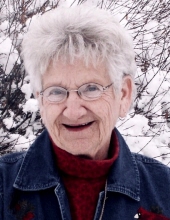 WAUBAY – Lorraine Jens 91 of Bristol, and formerly of Waubay, passed away Tuesday December 5, 2017 at Sun Dial Manor in Bristol. Funeral Services will be 10:30 A.M. Saturday December 9, 2017 at Zion Evangelical Lutheran Church in Waubay. Burial will be in the Lakewood Cemetery. Visitation will be Friday 5-7 P.M. closing with a prayer service at 7P.M. at Fiksdal Funeral Service in Webster. Lorraine Esther Winter was born on September 20, 1926 to Fred and Margaret (Jensen) Winter in Alvord, Iowa, where she was raised and attended school. During her high school years at Alvord High School she played basketball and graduated in 1943. After she received her education she worked as a housekeeper for a family in Luverne, Minnesota. On December 19, 1944 she was united in marriage to Fred Jens at Luverne, Minnesota. After their marriage the couple made their home in Rock Valley, Iowa. To this union nine children were born. In 1956 the family moved to Humboldt, South Dakota and in 1959 they relocated to Waubay, South Dakota. She worked as a nurse’s aide at Day County Hospital in Webster; she also was a Vista volunteer through N.E.S.C.A.P. Lorraine also did in home daycare for a number of years. Lorraine always kept busy landing her a position as a cook at the café in Waubay as well as the Waubay Senior Center. Fred passed away in September 1985. After his death she continued to live in Waubay until 2011 when she moved to Prairie Crossings Assisted Living in Watertown. In 2012, she moved to Sun Dial Manor in Bristol, where she was currently residing. She loved singing and sang at many funerals over the years. She loved crafts, crocheting, sewing, baking, cooking, canning, playing competitive board and card games, and vegetable as well as flower gardening. She loved Christmas time and was known for her abundance of baked goodies during the holidays. She was a great supporter for all her children’s school activities as well as watching Brenda play basketball. Lorraine had a passion for high school sports, and often watched local teams in the SD State B Basketball Tournaments on television. She also enjoyed a cup of coffee while sitting out on her deck soaking in the sunshine. Above all else, Lorraine cherished time spent with her family. She will be greatly missed by all who had the privilege of knowing her. Lorraine passed away on Tuesday, December 5, 2017 at Bristol, South Dakota at the age of 91 years, 2 months and 15 days. Survivors include two sons, Kevin Jens of Waubay, SD and Brett (Robin) Jens of Tulare, SD; five daughters, Paula (Arnie) Beisch of Waubay, SD, Lori (Dick) Allran of Billings, MT, Brenda “BJ” Jens of Waubay, SD, Vicki (Bob) Kampa of Elk River, MN and Terri (Kevin) Gaikowski of Watertown, SD; a son-in-law, Darrel Koch of Watertown, SD; one sister, June Kahl of Rock Rapids, Iowa; 20 grandchildren and thirty two great grandchildren (& one on the way!). She was preceded in death by her parents, husband, one daughter, Becky Koch, one son, Mark Jens, one grandson, Ty Jens, and nine siblings.
To send flowers to the family in memory of Lorraine Esther Jens, please visit our flower store.