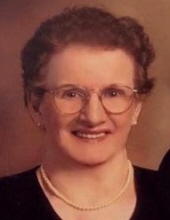 Louise Blank 90 of Roslyn passed away peacefully, surrounded by her family at Strand-Kjorsvig Community Rest Home in Roslyn. Her funeral will be 10:00 A.M. Thursday April 7, 2016 at Fiksdal Funeral Chapel in Webster. Visitation will be Wednesday 5-7 P.M. with a 6:30 prayer service at the funeral home. Burial will be at the Roslyn Cemetery at a later date. Louise Carol Knutson was born on February 1, 1926 to Clarence and Nellie (Simpson) Knutson at Pelican Rapids, Minnesota. She was baptized and confirmed at Trinity Lutheran Church in Pelican Rapids. She attended country grade school through the eighth grade and graduated from Pelican Rapids High School in 1943. After high school she attended college in Moorhead, Minnesota and Aberdeen South Dakota to obtain her teaching certificate. Upon completion of her college education, Louise took a teaching position at a one room country school near Pelican Rapids. Her next teaching job took her to Roscoe, South Dakota and eventually landing her in Roslyn, South Dakota. On June 3, 1951, she was united in marriage to Ed Blank at Pelican Valley Lutheran Church in Minnesota. The couple made their home in Roslyn. To this union four children were born, Lynnelle, Jacey, Gwen, and Tim. Louise became a stay at home mom until the youngest started school at which time she entered the education system again as a substitute teacher. Louise then took a job at Strand Kjorsvig working as a CNA and later the director of activities. She retired in 1991. After her retirement, Louise and Ed enjoyed traveling, visiting every state west of the Mississippi and some on the east side. The couple also visited Hawaii, Ecuador and Mexico, along with many trips to Branson, Missouri. Louise cherished their summers spent at their Pickerel Lake cabin. Louise and Ed were avid Roslyn Viking fans, attending all sporting events throughout the years. Louise was a great seamstress. She also enjoyed crocheting and gardening. Louise was known for her delicious homemade bread and doughnuts. She also had a knack for making scrumptious jams and canning her garden delights. Louise was a member of Roslyn Lutheran Church where she served as church secretary, ladies aid, and sang in the church choir. She was a member of the Legion Auxiliary, Music Mothers, and the Roslyn Birthday Club. Louise passed away Sunday April 3, 2016 at Roslyn, South Dakota at the age of 90 years, 2 months and 2 days. She will be forever loved and greatly missed by her husband Ed of Roslyn, SD; three daughters, Lynnelle Blank of Huron, SD, Jacey (Scott) Hoecker of Duluth, MN, and Gwen Kampa of Sioux Falls; one son, Tim (Martha) Blank of Eugene, OR. She is also survived by the apples of her eye, four grandchildren, Celeste Kampa, Josie Steinmetz, and Rachael and Stephanie Blank, along with four beautiful great-grandchildren, Christopher and Matthew Kampa and Remington and Kash Besaw. She was preceded in death by her parents, one brother, Bud Knutson, one grandson, Brandon Kampa, and one son-in-law, Lynn Steinmetz.
To send flowers to the family in memory of Louise C. Blank, please visit our flower store.