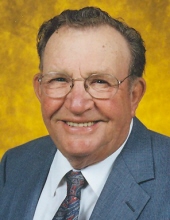 WEBSTER – Luverne Sauer, 89, of Webster passed away Thursday July 5, 2018 at Sanford Hospital in Sioux Falls. Services will be 2:00 P.M. Monday July 9, 2018 at Bethesda Lutheran Church in Bristol, Rev. Chris Strohm will officiate. Military burial will be in the Bristol Cemetery. Visitation will begin at 12 noon Monday at the church until service time. Luverne Walter Sauer was born on January 8, 1929 to Fred W. and Hannah (Pranky) Sauer at their family home in Webster, South Dakota. He was baptized at American Lutheran Church in Webster and confirmed as an adult at Central Lutheran Church in Minneapolis, Minnesota. He attended school in Webster and did carpentry work with his father throughout his teenage years. In May of 1951, Vern entered the United States Army. He served as a sergeant in Korea during the Korean War. Vern was noted saying, “I was a lucky platoon leader because I never lost a man!” He was awarded the Bronze Star for his bravery and leadership. Upon his honorable discharge, he returned to the Minneapolis area and worked in construction. On January 9, 1954 he was united in marriage to the love of his life, Nadine Huwe at Minneapolis. The couple made their home in Bloomington, Minnesota. Vern worked for Larsen Brothers Builders as foreman where he built architecturally designed homes until 1972. He then decided to start his own company, Sauer Building Company which he owned and operated for two years. He then went to work as foreman and then superintendent for Rauenhorst Construction Company (later known as Opus Corporation). He found the most interesting and challenging job while employed there was constructing the Flume Ride at Valley Fair. Besides the Twin Cities, Vern was in charge of constructing buildings in Phoenix, Arizona, Reno, Nevada, Omaha, Nebraska, St. Joseph, Missouri, and Sioux Falls, South Dakota. He worked for Opus until his retirement in 1989. After retirement, Vern and Nadine returned to Day County, where they built their home on the shores of Enemy Swim Lake. They continued to reside at the lake until 2012, when they moved to Webster. Vern was a member at Bethesda Lutheran Church in Bristol where he previously served on the church council. He was a former member at Christ the King Lutheran Church in Bloomington. He also served as a Boy Scout Master for Scout Troop 380 in Bloomington for many years. Vern loved golfing and was a member at Valley View Country Club at Sisseton where he golfed in two leagues and made many friends. In recent years, he enjoyed golfing at the Webster Golf Club. He also enjoyed bowling, fishing and watching sporting events on television. He was a kind man with a heart of gold and will be missed by all who had the honor of knowing him. Luverne passed away Thursday July 5, 2018 at Sioux Falls, South Dakota at the age of 89 years, 6 months, and 27 days. He will be forever loved by his wife Nadine of Webster, SD, one son Randal (Beverly) Sauer of New Prague, MN, two grandchildren: Wayne (Mandi) Sauer of Minneapolis, MN , Karen (Jeremy Vardaman) Sauer of Burnsville, MN, and two great-grandchildren Jace and Kobi Vardaman of Burnsville, MN. He is also survived by two brothers: Leroy (Carol) Sauer of Santa Maria, CA and Kenneth Sauer of Watertown, SD, and one sister Gladys (Frank) Noble of St. Louis, MO. He was preceded in death by his parents, beloved daughter Robin Sauer, and three brothers: Gordon, Clarence, and Lawrence.
To send flowers to the family in memory of Luverne W. Sauer, please visit our flower store.