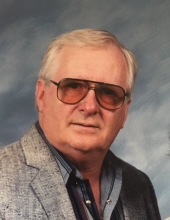 Lyle Huggett, 75 of Roslyn passed away Thursday, May 10, 2018 at Sanford Hospital in Webster. Mass of Christian Burial will be at 10:30 A.M. Thursday, May 17, 2018 at St. Joseph’s Catholic Church in Grenville. Burial will be in the church cemetery. Visitation will be at the church on Wednesday 5-7 P.M. ending with a 7 P.M. Rosary. Lyle Roger Huggett was born on September 17, 1942 to Henry “Hank” and Evelyn (Carlson) Huggett at the Peabody Memorial Hospital in Webster. The family lived at Roslyn. He was baptized and confirmed at Roslyn Lutheran Church. He attended school in Roslyn and graduated from Roslyn High School in 1960. In 1961 he joined the South Dakota National Guard and worked in his father’s Phillips 66 station. He was united in marriage to Dianne Schuster on June 29, 1963 at St. Joseph’s Catholic Church in Grenville. After their marriage the couple made their home in Roslyn. He purchased Hank’s Oil Company after his father’s death in 1975 and operated it until he sold the business in 1988. Then he began working as a rural mail carrier out of the Roslyn Post Office. He retired in 2008. After his retirement he and his wife continued living in Roslyn. He was a member of St. Joseph’s Catholic Church in Grenville where he joined as an adult. He enjoyed playing pool, taking care of his lawn and taking drives in the country. He was a sports enthusiast, especially following the Minnesota Vikings. Most of all he loved spending time with his family. Survivors include his wife, Dianne of Roslyn; one son, Lance (Brenda) Huggett of Long Prairie, MN; one daughter, Lisa (Loren) Schoenbeck of Webster, SD; one sister, Joyce Slade of Gilbert, AZ; ten grandchildren and two great grandchildren. He was preceded in death by his parents, two sons, Loren and Lane, and one grandson, Jacob.
To send flowers to the family in memory of Lyle Huggett, please visit our flower store.