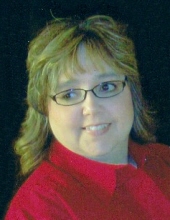 Marcia Gisselbeck, 48 of Webster died on Sunday, June 8, 2014 at her mother’s home in Webster. Her funeral will be at 10:00 A.M. on Saturday, June 14, 2014 at the United Methodist Church in Webster. Pastors Eugene & Marilyn Moeller, Rev. John Hisel & Rev. Randy Swanson officiating. Burial will be in the Webster Cemetery. Visitation will be at Fiksdal Funeral Service in Webster on Friday 5-7 P.M. with a 7 P.M. Prayer service. Fiksdalfuneral.com. Marcia Ann Lutz was born on Wednesday, November 10, 1965 to Lawrence and Borghild “Jo” (Bye) Lutz at Webster, South Dakota. She was baptized and confirmed at the United Methodist Church in Webster. She attended Webster Schools and graduated from high school in 1984. She attended Northern State University in Aberdeen. She was united in marriage to Dan Gisselbeck on June 11, 1994 at Watertown, South Dakota. After their marriage the couple lived at Arlington, South Dakota. She attended Dakota State University in Madison where she graduated in 1998. While going to school she worked at Arlington Sun newspaper in Arlington. In 1999 the couple moved to a farm south of Webster in Morton Township. She worked at Ken Roerig Insurance and then began working at Dakotacare. Because of her health she was forced to retire in 2010. She was a member of the United Methodist Church in Webster where she belonged to the U.M.W. where she served as President, directed the church choir, was a bible school helper and served as church secretary. She served as choir director for the Webster area Community Choir and was a member of the Day County Arts Council. She enjoyed playing her flute, embroidering, collecting dolls and pigs. She was fond of her dog and cat. She enjoyed baking, especially baking chocolate chip cookies with her nieces and nephews. She will be remembered for her quick wit and giving nick-names to those she met. Marcia passed away on Sunday, June 6, 2014, surrounded by family and friends at Webster, South Dakota at the age of 48 years, 6 months and 29 days. Survivors include her husband, Dan of Webster; her mother, Jo Lutz of Webster; two brothers, Loren (Patty) Lutz of Webster and Lynn (Vonnie) Lutz of Bristol; one sister, Mary (Monty) Bloom of Webster; many nieces and nephews, and great nieces and nephews. She was preceded in death by her father.
To send flowers to the family in memory of Marcia Gisselbeck, please visit our flower store.