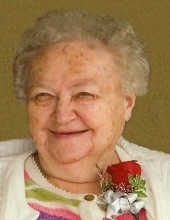 Margaret Hoberg, 92 of Webster died on Saturday, March 04, 2017 at Bethesda Home in Webster. Her funeral will be at 11:00 A.M. Wednesday, March 8, 2017 at American Lutheran Church in Webster, Rev. Charles Bunk will officiate. Burial will be in the Webster Cemetery. Visitation will be at the funeral home on Tuesday 5-7 P.M. and prior to services at the church on Wednesday. Margaret Mae Tekrony was born on December 13, 1924 to John G. and Dora (Van Steenwyk) Tekrony at a rural farm home in Havana Township near Bemis, South Dakota. She was baptized at Bemis Christian Reformed Church. She attended school for eight years at Hamlin No. 14 country school and graduated from Castlewood High School in 1943. Upon graduation she attended Mankato Commercial College, graduating in 1945. On February 12, 1947 she was united in marriage to Lloyd Hoberg at the American Lutheran Church in Webster. After their marriage the couple made their home on the Hoberg family farm, south of Webster in Rusk Township. Margaret worked in Webster at Northwestern Public Service Company, Dakotah, Inc. Day County Welfare Office and Dacotah Bank until she retired. In October 2000 the couple moved to Webster. Lloyd passed away in October 2000. Since January 2007 she has resided at Bethesda Home in Webster. She was a member of American Lutheran Church in Webster where she was active in Circle and Ladies Aide. Margaret enjoyed tending to her garden, canning the produce and most of all, she enjoyed her grandchildren and great grandchildren. Margaret passed away on Saturday, March 4, 2017 at Webster, South Dakota at the age of 92 years, 2 months and 19 days. Survivors include two sons, Larry (Jeanette) Hoberg of Tucson, AZ and Loren (Linda) Hoberg of Webster, SD; two daughters, Linda (David) Anderson of Groton, SD and Lana (John) Gollnick of Webster, SD; nine grandchildren, two step-grandchildren, twelve great grandchildren, three step-great grandchildren and one step-great-great grandchild. She was preceded in death by her husband, parents, one sister, Dena Bleeker and a great grandson, Braden Anderson.
To send flowers to the family in memory of Margaret Hoberg, please visit our flower store.