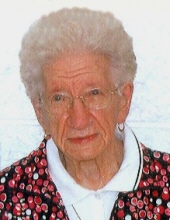 Margaret Lindroth 100 of Roslyn passed away Sunday July 24, 2016 at Strand Kjorsvig Living Center in Roslyn. Her funeral will be at 2:00 P.M. Saturday, July 30, 2016 at Tabor Lutheran Church near Webster, Mike McCarlson will officiate. Burial will be at the church cemetery. Visitation will be at the funeral home on Friday 5-7 P.M. and prior to services at the church. Margaret Evelyn Dalager was born on Thursday, May 4, 1916 to Andrew and Josephine (Nilson) Dalager on the family farm in Lynn Township, Day County, South Dakota. She was baptized and confirmed at Tabor Lutheran Church north of Webster. She attended Green Back #150 country school near her home and graduated from Roslyn High School in 1935. After graduation she moved to Minneapolis. She was united in marriage to Marvin Lindroth on February 8, 1941 at Nakomes Heights Lutheran parsonage in Minneapolis. After their marriage the couple made their home in Minneapolis where she worked at various jobs including a department store clerk and a cook. After her husband’s retirement the couple moved to Roslyn in 1976. Marvin passed away in June 2007. After his death she remained in Roslyn and entered Strand-Kjorsvig Community Rest Home in November 2011. She was a member of Tabor Lutheran Church where she was active in the ladies groups. She loved to knit and made fancywork for Tabor’s annual fancywork sale. She also volunteered at Strand-Kjorsvig. Margaret passed away on Sunday, July 24, 2016 at Roslyn, South Dakota at the age of 100 years, 2 months and 20 days. Survivors include one son Marvin Lindroth of Roslyn, SD; five grandchildren, seven great grandchildren, four great-great grandchildren and several nieces and nephews. She was preceded in death by her parents, her husband, one daughter, Joyce, a son-in-law, four sisters and four brothers.
To send flowers to the family in memory of Margaret Lindroth, please visit our flower store.