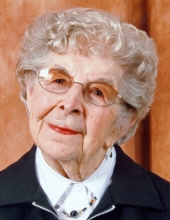 Marjorie Peckham, 94 of Webster died on Tuesday, July 28, 2015 at Bethesda Home in Webster. Memorial services will be at 2:00 P.M. Monday, August 3, 2015 at Fiksdal Funeral Chapel in Webster, Rev. Chris Strohm officiating. Inurment will be at Bristol Cemetery. Visitation will be one hour prior to services on Monday. Marge was born on May 25, 1921 to Ray and Emma (Olson) Peckham on a farm near Lily, South Dakota. She was baptized in Our Savior’s Lutheran Church, a country church south of Lily, and confirmed in Butler Lutheran Church. She attended country school and graduated from Bristol High School in 1938. Marge spent her life in education until retirement, having first earned a one year teaching certificate from Northern State Teacher’s College. She then taught in country schools. With her two year teaching certificate she taught elementary grades in Britton, Mobridge and Groton Schools. After obtaining her four year degree, she taught in Watertown Junior High School for several years, and finally with her Master’s degree in guidance and counseling, spent the last twenty five years of her career as a high school counselor in the St. Louis Park, Minnesota school system. Between degrees earned, she continued to further her education by attending seminars, conferences and summer shool sessions at various colleges and universities throughout the country. After serving the counseling department for ten years at St. Louis Park, she earned a sabbatical leave to earn more credits in the field of counseling and guidance. At the time she spent one semester at Colorado State University and second semester at the University of Hawaii. She then returned to St. Louis Park until her retirement. Following retirement she divided her time living in Bristol and spending winters in Arizona. While in Bristol she was involved in Bethesda Lutheran Church activities, Octavo Study Club, V.F.W. Auxiliary, Retired Teacher’s Organization, Bridge Club, served on the Bristol Cemetery Board and volunteered at Storybook Land in Aberdeen. In Arizona she was involved in the activities of the park where she lived, but especially enjoyed being a member of the ladies billiard team, playing weekly tournaments with other teams in the area. She enjoyed traveling, having visited all fifty states, Canada and Mexico. Two of her favorite trips were to and though the Scandinavians countries and a Mediterranean cruise including the Holy Land. In February 2005 she moved to the Primrose Retirement Apartments in Aberdeen. In August 2008 she moved to Heritage Village in Webster and in May 2015 she entered Bethesda Home in Webster. Marge passed away on Tuesday, July 28, 2015 at Webster, South Dakota at the age of 94 years, 2 months and 3 days. Survivor include twelve nieces and nephews; Carole Azevedo of Patterson, CA, Cindy Kohn of Eagan, MN, Keith and Kent Antognini both of Santa Barbara, CA, Darwin (Marsha) Peckham and Daryll (Deb) Peckham, Vicki (Brent) Zimmerman all of Bristol, SD, Rebecca Jefferson of Eagle River, WI, Douglas Peckham of Seattle, WA, Karen (David) Schaaf, Susan (Harry) Mazgedian and Charles Arntz all of Fresno, CA. She was preceded in death by her parents, two brothers, Jesse and Clayton, two sisters, Fern Antoginini and Virginia Arntz and one nephew, Robert Acker.
To send flowers to the family in memory of Marjorie Peckham, please visit our flower store.