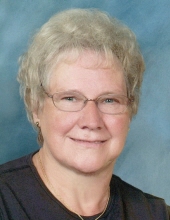 Marlys Berg, 74 of Webster died on Wednesday, September 03, 2014 at Bethesda Home in Webster. Her funeral will be at 11:00 A.M. Saturday, September 6, 2014 at St. John’s Lutheran Church in Webster, Rev. Daniel Ostercamp will officiate. Burial will be in Webster Cemetery. Visitation will be at the funeral home on Friday 5-7 P.M. closing with a prayer service and will continue prior to services on Saturday at the church. Marlys “Tootsie” Elna Berg was born on February 16, 1940 to Morris and Elna (Christenson) Jacobson in Montevideo, MN. Her mother passed away in 1942. Her father married Marlys Anderson in 1944. Later the family moved to the Webster area. She graduated from Webster High School in 1958 and worked at the hospital as a nurse’s aide after high school. She was married to Martin Berg on June 17, 1962 in Webster, where they lived for most of their married life. She worked at Bethesda Nursing home as a restorative physical therapy aide for over 30 years until her retirement in 2006. She was a member of St. John’s Lutheran Church in Webster. She enjoyed camping on the weekends with family. She also enjoyed cooking, baking, traveling and spending time with her grandchildren. Survivors include her husband of Webster, one daughter, Jackie (Jody) Jorgenson of Webster; three sons, Jim (Pauline) Berg of Killeen,Texas, Dave (Stacy) Berg of Watertown, and Steve(Tara) Berg of Pierre; two brothers, Fred (Becky) Jacobson of Jacksonville, FL and Allen (Cindii) Jacobson, of Avondale, Arizona; two sisters, Burnette (Terry) Reddy and Mary Lou (Carl) Maack both of Aberdeen; and 7 grandchildren and several nieces and nephews. She was preceded in death by her parents, step-mother, one brother, one grandson and a nephew.
To send flowers to the family in memory of Marlys Berg, please visit our flower store.