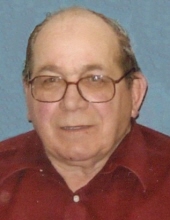 Martin Eisenbraun, 77 of Webster died on Monday, April 28, 2014 at Strand-Kjorsvig Community Rest Home in Roslyn. Memorial services will be at 2:00 P.M. Friday, May 2, 2014 at United Methodist Church in Webster, Pastors Eugene & Marilyn Moeller will officiate. Inurnment with military rites will be in the Webster Cemetery. Friends can visit family members at the funeral home on Thursday 5-7 P.M. Martin Christian Eisenbraun, Jr. was born on Tuesday, March 23, 1937 to Martin and Adella (Schwarting) Eisenbraun near Creighton, South Dakota. He was baptized in the Lutheran faith at Wall, South Dakota. He attended school and graduated from Wall High School in 1955. After he received his education he enlisted in the U.S. Army and was stationed in Korea. After he received his honorable discharge he returned to the Wall area and worked in the Wall and Rapid City area. On August 4, 1962 he married Helene Roitsch at Bristol, South Dakota. After their marriage the couple made their home in Rapid City. In 1964 they moved to the Conde area where he worked for area farmers. In 1970 they purchased a farm near Butler where he was engaged in farming. In 1978 they moved to Webster. He continued farming and also worked as a custodian at Webster Schools. He began working at Harvest States Elevator in Webster in 1983 and then in 1998 started working for Hansmeier & Sons in Bristol. Poor health forced his retirement in 2002. He entered Strand-Kjorsvig Community Rest Home in Roslyn in October 2012. He was a Life Member of V.F.W. Post 4690 in Webster where he had served as Commander. He enjoyed fishing, hunting and playing cards. He also liked spending time with his grandchildren. Martin passed away on Monday, April 28, 2014 at Roslyn, South Dakota at the age of 77 years, 1 month and 5 days. Survivors include Helene Eisenbraun of Webster; two sons, Mike (Sandi) Eisenbraun and Tim (Shelly) Eisenbraun both of Webster, SD; three daughters, Patty Eisenbraun of Sioux Falls, SD, Vicki Coin and Nancy (Steve) Olson both of Webster, SD; one brother, Roger (Valerie) Eisenbraun of Morrison, CO; two sisters, Ida Nieffer of Custer, SD and Dorothy (Dale) Jensen of San Antonio, TX; and six grandchildren. He was preceded in death by his parents, one son, Jeffrey, a son-in-law, Ed Coin, six brothers and three sisters.
To send flowers to the family in memory of Martin Eisenbraun, please visit our flower store.