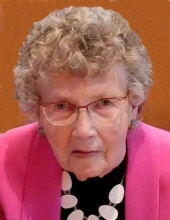 BRISTOL – Mary Raap 80 of Bristol passed away Friday September 15, 2017 at Sun Dial Manor in Bristol. Her funeral will be 10:00 A.M. Friday September 22, 2017 at Bethesda Lutheran Church in Bristol. Burial will be at the Bristol Cemetery at a later date. Visitation will be Thursday 5-7 P.M. at Fiksdal Funeral Service in Webster. Fiksdal Funeral Service is in charge of the arrangements. In lieuof flowers, memorials may be sent to: Park Nicollet Struthers Parkinson Center 6701 County Club Drive Golden Valley, MN 55427 Mary Louise Sletten was born on May 4, 1937 to Joseph and Josephine (Tastad) Sletten in Bristol, South Dakota. She was baptized and confirmed at Bethlehem Lutheran Church in Pierpont, South Dakota. Mary attended country school near Pierpont and later high school in Pierpont where she was crowned Pierpont Snow Queen. She graduated from PHS in 1956. As a child, she would spend summers with her older sister Rhoda and her husband in St. Paul. After high school she returned to her sisters in St. Paul and worked as a secretary at Farm Bureau. On September 20, 1958 she was united in marriage to Robert Raap in Pierpont. To this union three children were born, Jon, Mary Jo, and Carolyn. The family made their home on a farm west of Bristol, South Dakota. Mary and Bob farmed for many years. Mary drove grain truck and helped with many aspects of the farming operation, including caring for their pigs and other livestock. Mary was a very hard worker and took great pride in her homemaking skills. She was a wonderful cook! She enjoyed cooking, baking and entertaining family and friends for a sit down meal at a beautifully dressed table. In 1990, Mary and Bob moved into Bristol. Even though the couple “retired” from farming, they still enjoyed checking in on Jon and happenings at the farm. Mary was very active in the community. She volunteered for the local blood drives as well as assisting with fall festivities with “The Haunted Warehouse”. Mary was known to decorate and dress up for Halloween to amuse the trick-or-treaters! Mary knew how to have a good time! She always had a suitcase full of dress clothes and shoes for the grandkids to play “dress up” which usually accompanied a tea party. She enjoyed taking the kids on great adventures to various homesteads in the area. Her grandchildren will also remember Grandma Mary’s love of board games, especially “Clue”. She enjoyed sewing, woodworking, playing piano, singing, refinishing furniture and upholstery, crafting, and above all else, she cherished time spent with her family. Mary was a member at Bethesda Lutheran Church where she served as secretary for a number of years, as well as choir director and Sunday school teacher. She was also a member of Mary Naomi Circle, Octavo Study Club, Evening Star Club, WELCA, prayer shawl team, RSVP, as well as a co-founder of a program for hearing and vision screening for pre-schoolers. Mary passed away Friday September 15, 2017 at Bristol, South Dakota at the age of 80 years, 4 months, and 11 days from complications of Parkinson’s Disease. She will be greatly missed by her husband of nearly 59 years, Bob of Bristol, SD, one son Jon (Sherry) Raap of Bristol, SD, two daughters; Mary Jo (John) Koniowsky of Helotes, TX, and Carolyn (Eugene) Conn of Aberdeen, SD, one brother Wally (Lavonne) Sletten of Montevideo, MN, six grandchildren, and two great-grandchildren. She was preceded in death by her parents, two brothers; Royal Sletten and Robert Sletten, and three sisters; Rhoda Warner, Phyllis Cameron, and Opal Cameron.
To send flowers to the family in memory of Mary Raap, please visit our flower store.