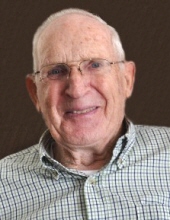 Maurice Bierschbach, 96, of Webster, SD, passed away on Wednesday, October 6, 2021, at Bethesda Home in Webster. Mass of Christian Burial will be 10:00 A.M. Saturday October 9, 2021 at Christ The King Catholic Church in Webster and will be livestreamed on Fiksdal Funeral Service Facebook page. Military interment will be at St. Ottos Catholic Cemetery near Webster. Visitation will be at the church Friday 5-7 P.M. closing with a 7P.M. rosary service. Maurice William Bierschbach was born to William and Lenore (Karrigan) on April 22, 1925, at Webster, South Dakota. He was baptized and confirmed at St. Otto’s Catholic Church in Webster, SD. He attended parochial school and later graduated from Webster High School in 1943. After high school he was inducted into the United States Navy on February 17, 1945, where he served aboard the Aircraft Carrier USS Langley in the South Pacific. After his honorable discharge in July 1946, he continued his education at South Dakota State University where he was a member of the Alpha Zeta Fraternity and graduated from SDSU in 1950. He was united in marriage to Patricia Meyer of Nassau, MN in 1952. The couple have five sons: Douglas, Bruce, Scott, Brian, and Daniel. The family first made their home in Waubay, SD where Maurice taught High School Agriculture and then they moved to Jeffers, MN where he continued to teach agriculture classes. Maurice and Pat moved back to the family farm in 1963 where he farmed while also continuing his agriculture teaching career for many years. Maurice served on many boards including ASCS, Weed Board, Beef Improvement and Production Credit Association as a director and chairman. He was a member of the VFW, where he served as the chairman of the local VFW Voice of Democracy Essay contest for more than 28 years. Maurice was a lifetime member of both the VFW and American Legion for more than 70 years. He was also a member of the Knights of Columbus receiving Knight of the year for the State of South Dakota. Maurice was very active in serving his church as a Eucharistic Minister and lector. Maurice and Pat enjoyed traveling to many places including Europe, Australia, Panama, Nova Scotia and many more. He also enjoyed golf, dancing, the outdoors, and watching sports especially wrestling and football. Of all Maurice’s accomplishments he was very proud of his family. He is survived by his wife, Pat Bierschbach of Webster, SD; five sons, Douglas (Vicki) Bierschbach of Lake Norden, SD, Bruce (Judy) Bierschbach of Cincinnati, OH, Scott (Chere’) Bierschbach of Webster, SD, Brian (Susan) Bierschbach of Chaska, MN, and Dan (Donna) Bierschbach of Watertown, SD; two sisters-in-law, Mary Bierschbach and Harriet Spaniol; 19 grandchildren and 16 great grandchildren; and several nieces and nephews. Preceding him in death are his parents William and Lenore (Karrigan); three brothers Dennis, Claire, and Jerald; sister-in-law Betty and grandson Matthew.
To send flowers to the family in memory of Maurice Bierschbach, please visit our flower store.

Closing with a rosary service at 7PM.