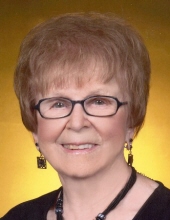 Maxine Biersbach 95 of Bristol died Saturday October 18, 2014 at Sun Dial Manor in Bristol. Her funeral will be at 10:30 A.M. Friday, October 24, 2014 at Bethesda Lutheran Church in Bristol, Pastors Terrill and Sara Sorensen will officiate. Inurnment will be in Bristol Cemetery. Visitation will be at the funeral home on Thursday 5-7 P.M. and prior to services on Friday. Maxine Stella Taylor was born on Saturday, April 26, 1919 to Clyde and Sylvia (Phipps) Taylor at Aberdeen, South Dakota. The family lived on a farm near Conde where she grew up. She attended country school and then graduated from Conde High School in 1937. After high school she attended Northern Normal in Aberdeen and received the Teaching Certificate and then taught school in Verdon and Andover. On September 1, 1941 she was united in marriage to Clarence Biersbach at Andover, South Dakota. After their marriage she lived and taught in Andover while her husband was in World War II. When he was discharged the couple made their home in Bristol where she was a homemaker and raised her family. She returned to Northern State Teacher’s College in Aberdeen and finished her teaching degree and taught in the Groton school system until her retirement in 1987. Clarence passed away in October 2000. After his death she remained in Bristol until the present time. She was a member of Bethesda Lutheran Church where she was active in W.E.L.C.A. and the Prayer Shawl Ministry. She belonged to the Bristol Red Hat Society and several bridge clubs. She enjoyed reading and traveling. She also loved to be with her grandchildren. Maxine passed away on Saturday, October 18, 2014 at Bristol, South Dakota at the age of 95 years, 5 months and 22 days. Survivors include two sons, Robert (Gwen) Biersbach of Milbank, SD and Jon (Joan) Biersbach of Bristol, SD; one daughter, Shala (Tim) Knutsen of Crystal Lake, IL; a sister-in-law, Eileen Taylor of Los Angeles, CA; nine grandchildren and eight great grandchildren. She was preceded in death by her parents, husband, six brothers and one sister.
To send flowers to the family in memory of Maxine Biersbach, please visit our flower store.